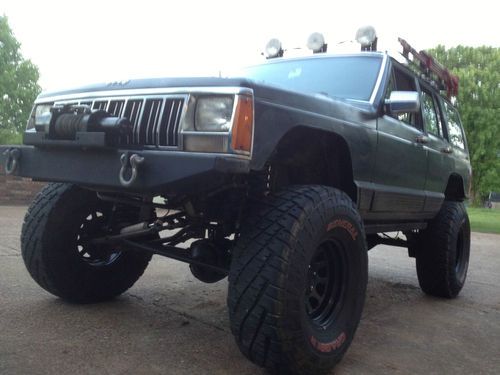 Condition: Used: A vehicle is considered used if it has been registered and issued a title. Used vehicles have had at least one previous owner. The condition of the exterior, interior and engine can vary depending on the vehicle's history. See the seller's listing for full details and description of any imperfections. ...
ONE BIG JEEP
OVER $10K INVESTED.  LIFTED RIGHT & STRAIGHT.THIS JEEP IS A RELIABLE DAILY DRIVER / CRAWLER, ON ROAD / OFF ROAD MACHINE.
GOOD:A/C, HEAT, POWER WINDOWS & DOOR LOCKS, CRUISE CONTROL.4.0 INLINE 6 ENGINE WITH ONLY 80K & FRESH TUNE UP & NEW STEERING PUMP.  215K ORIGINAL BUT IT HAS BEEN UPGRADED AS YOU CAN TELL.
STRONG AUTOMATIC TRANSMISSION.  DANA 44 REAREND WITH NEW GRIZZLY LOCKERS ($1500).
I WOULD DRIVE THIS ACROSS COUNTRY ON THE HIGHWAY OR OFF ROAD TODAY.
10" LIFT DONE RIGHT... A COMBINATION OF RUSTYS AND OTHERS WITH LEAFS IN BACK.LOTS OF EXTRAS:  RAMSEY WINCH, 35" TIRES AND FULL 35" SPARE, ROCK RAILS, ENTIRE FLOOR BLACK COATED, CB, WHIP, TALL JACK, HELLA LIGHTS, NICE CUSTOM ROOF RACK, HEAVY DUTY FRONT AND REAR BUMPERS, BLUETOOTH STEREO, TRIM CHROME PIECES, MANUALS, SHOVEL.
ONLY NEEDS BUT NOT NECESSARY: PAINT IT THE WAY YOU WANT IT, BACK DOOR LIFTERS,  PASSENGER EXIT HANDLE BENT AND SMALL TEAR IN DRIVER SEAT.  JEEP IS LOADED AND EVERYTHING ELSE WORKS.
READY TO GO ANYWHERE WITH ALL YOU NEED.  CLEAR TITLE IN HAND.  FOR MORE INFORMATION CALL 615-395-9990.
THIS VEHICLE IS BEING OFFERED FOR LOCAL SALE AND MAY SELL BEFORE AUCTION ENDS.  IT IS SOLD "AS IS" FOR LOCAL PICK UP ONLY NEAR NASHVILLE, TN.  DELIVERY IS AVAILABLE FOR AN EXTRA PRICE.
THANKS FOR LOOKING.