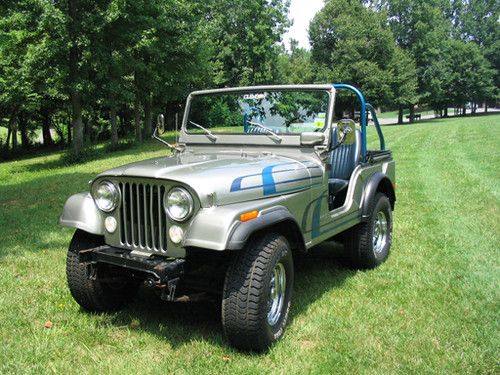 One word to describe this Jeep would be "beautiful".  It's sad, but my loss is your gain, I need room for a garage workshop. The Jeep has been garaged for the past 7 years. Complete maintenance record since 2004. The miles on the jeep odometer are 00193 however we do not know the actual miles. The frame and body are solid. No major rusting of the body or frame.  The finish on the paint is very good. The interior floor and under carriage has been coated with bed liner. The bed of the jeep has been diamond plated. There is rubber flooring covering the entire floor in the passenger compartment.  The engine runs beautifully and the transmission pulls hard. We had the transmission, fuel system (tank, carburetor), ignition system rebuilt. Aesthetically and mechanically the Jeep is in great shape.  Front bumper was damaged in a minor collision.  The seats are very comfortable and in great condition, the vinyl has no tears whatsoever. A Bestop soft-top and bikini top come with the Jeep. Both tops are in good condition and fit the jeep like a glove.

The jeep is located in Cramerton, NC, about 20 minutes outside Charlotte.