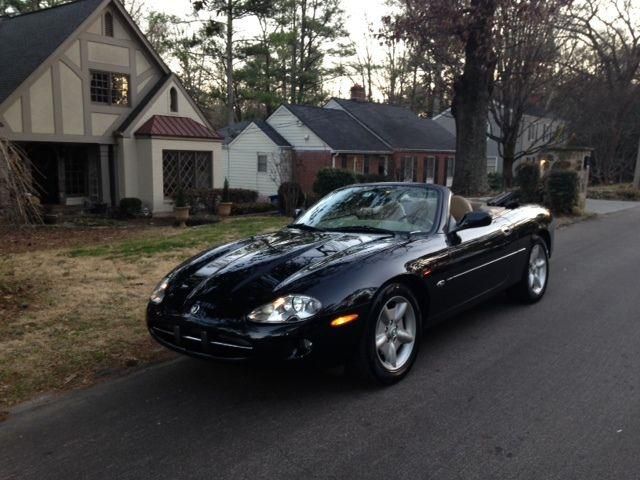 If youâ€™ve been looking for a low mileage XK8 this is it. At 38,000 miles this car is barely broken in. Everything works as new. I have had a lot of high performance sports cars and beats them all as far grace beauty and exhilarating performance. In the first 12 years of itâ€™s this car mostly sit in a garage, when we bought it in 2012 it had less than 8,000 miles on. Yes, it was owed by a rich old lady who never drove it. The sticker price was 72,895. With the help of Georgia Luxury Automotive we carefully preformed all necessary maintenance for a car that had barely been driven. CAR COMES WITH CONVERTIBLE TOP COVER. SEE LAST PICTURE. All up grades have been done for a Beauty with ONly 38,000 At 37,000 New Kumho-Ecsta Tires At 36,000 Replaced plastic timing belt tensioners with up-graded Metal Timing Belt Tensioners. At 24,000 Replaced Lf. Front Wheel Bearings At 22,000 New water pump with Upgraded Metal Blades, Thermostat and Replaced Drive Belt At 13,000 Replace Rt. Front Wheel Bearings At 13,000 Replaced ECU At 12,000 Replaced Front and Rear Wishbone Bushings This car is in excellent mechanical condition, it does have some minor cosmetic flaws. (see photos) Exterior: Left Front fender had a golf ball dent repaired. When this was done we repainted the front hood and both fenders Drivers door tiny dent Drivers size quarter panel small arch shaped scratch and tiny dent where a bike fell. You have to get up close to see it. There is slight fading on the top of the rear trunk but it still buffs out to a nice shine with wax. Interior: The original leather is in amazing shape for a car of this age, there are no cracks but there are small imperfections. Drivers seat had a wear a stitch. There are a few tiny cracks in the wood trim at the shifter. A minor flaw at a stitch on the passenger seat. Drivers side speaker covers are secured by optional interior screws. CARFAX REPORT CLEAN!!!! AutoCheck Vehicle History Report 1997 Jaguar XK XK8 Report Run Date: 2014-01-29 13:54:43.925 EST Report Summary Class: Sport Car - Premium Engine: 4.0L V8 EFI Country of Assembly: United Kingdom Vehicle Age: 17 year(s) Calculated Owners: 3 VIN: SAJGX2744VC006812 Year : 1997 Make : Jaguar Model: XK XK8 Style/Body: Convertible 2D AccidentCheck Reported accidents: 0 Title and ProblemCheck Your vehicle checks out! OdometerCheck Your vehicle checks out! Last Reported Odometer: 31,283 Your vehicle checks out! There have been no accidents reported to AutoCheck for this 1997 Jaguar XK XK8 (SAJGX2744VC006812). AutoCheck receives its accident data from government sources and independent agencies, and based on the information available to us, we have found that no accidents have been reported on this vehicle. Not all accidents or damage events are reported to AutoCheck.