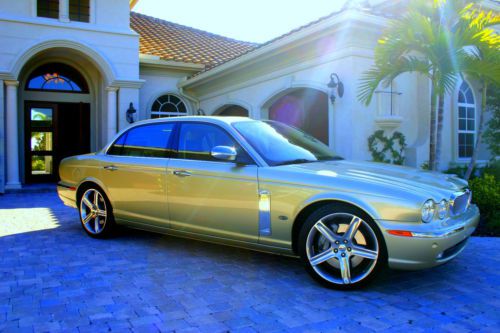 Two days ago, Jaguar announced it had something special in store for the Goodwood Festival of Speed this weekend. Then yesterday images of that special creation, the F-Type Project 7, leaked out. And now, as promised, Coventry has released the full details on the ultimate F-Type to date. And its even better than we expected.
The production version of the concept revealed last year, the F-Type Project 7 celebrates the 60th anniversary of the D-Type by borrowing some of that legendary roadster's design cues, right down to the rear fin and British Racing Green livery with white racing stripes.
Of course the Project 7 is more than just a retro appearance package. The bespoke speedster packs a version of Jaguar's prolific 5.0-liter supercharged V8 with 575 horsepower - 25 more than the F-Type R Coupe - to make it the Leaping Cat marque's most powerful production car to date. Mated to Coventry's familiar eight-speed automatic transmission, that's said to be enough to propel the Project 7 to 60 in 3.8 seconds en route to an electronically limited top speed of 186 miles per hour. Keeping all that power and pace in check and on the road are such features as carbon ceramic brakes, a full complement of carbon-fiber aero components, electronic differential and brake-based torque vectoring system.