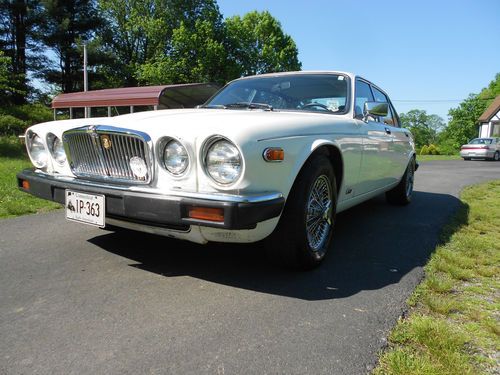 This has been my personal car, it's a rare find, originally a Texas vehicle, I left the stickers on, refer to pictures, the vehicle has been in the past and currently is owned by a car enthusiast. Also you don't seem many of them around anymore "The last of the real jags". Has nice white paint with black leather. Very clean. The paint is in good condition, the leather is in good condition as well. The vin # on the vehicle is SAJJCALP4CC384200. It has a clear title also. It drives very nice, it handles well, shifts good, and the engine is strong. Recently had the vehicle serviced, with a record of the mechanics bill handy. A/C, radio, windows, the lights all work on the vehicle. The wood finish is in good condition, couple of cracks here and there but overall in nice shape, headliner is in good condition, etc.  Any questions don't hesitate to send me a message, thank you.

The vehicle is sold as is with no warranty's

Jaguar's new F-Type is a pretty potent little pouncer. And while we do love a good roadster, many of us at Autoblog are perhaps more excited about the upcoming hardtop version of Jag's stylish new entry-level sports car. Why? Because even here in heavily camouflaged prototype form, the thing looks really, really good - the sleek roofline blending rather nicely into the F-Type's shapely rump, allowing for better distinction of its pronounced hips over the rear wheel wells.
Mechanically speaking, the F-Type Coupe should be identical to its droptop sibling. That means the supercharged 3.0-liter V6 and 5.0-liter V8 engine lineup should carry over unchanged, though we've heard rumors about a four-cylinder application as well. There's also talk of hotter R, R-S or R-S GT models coming down the pipeline, and based on what we've experienced in things like the XKR-S, we certainly can't deny the allure of such a model.
It's unclear exactly when Jaguar will show the production F-Type Coupe (at the Frankfurt Motor Show, perhaps?), but the car is expected to go on sale sometime in 2014. Check it out in our latest spy gallery, above.