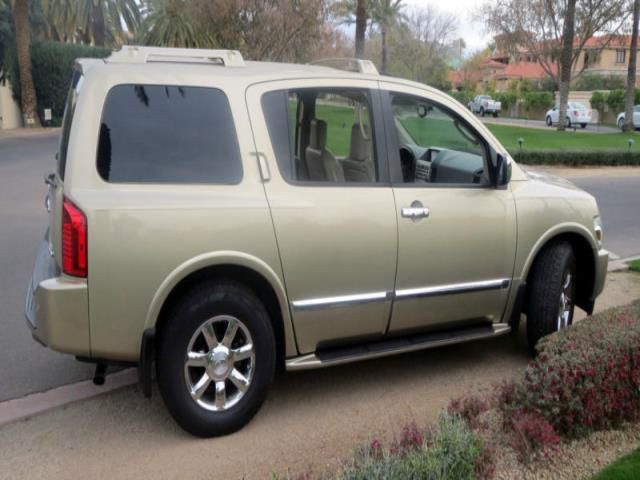 This is a smoke free Luxury SUV with 5.6 l V-8 -- 5 speed automatic transmission Standard equipment includes a DVD-based navigation system with a seven-inch monitor and voice command, a power-operated rear tailgate, a 10-way power driver seat with memory and lumbar adjustment, an eight-way passenger seat, front and second-row heated seats, reclining rear seats and power-adjustable pedals. Electrically adjustable positioned steering wheel with memory. A standard Bose audio system with an in-dash six-disc CD changer and 10 speakers with available satellite radio. Has every option available for this year. Power Sun Roof, Smart Vision Package Intelligent Cruise Control, Rear view monitor display, Rear Entertainment System with remote, two wireless headsets and DVD player in console. Steering wheel controls for audio system and cruise control, Home Link system, Rear view monitor display. Issues; intermittent to non-working tachometer, Engine Exhaust leak, A/C vent actuator makes noise changing position, front shocks/struts worn out and a couple of very small issues. (Scratches and scrapes) This vehicle has been in Arizona most of it's life and has zero corrosion issues. It is very clean and is in fantastic condition. The interior is awesome. This vehicle is free and clear of any liens and is owned by the second owner outright. Actually the second and third owner are a married couple. Sadly the husband passed away and the wife has had the title transferred to her name so it can be sold. It is available for viewing an advanced notice please contact seller. It is located about 3 miles North of Phoenix SkyHarbor Airport. The successful winning bidder will have 72 hours to make a non-refundable deposit $300 via Pay Pal. If you do not have Pay Pal then please do not bid. The remaining winning bid will be handled in cash during banking hours at a bank or with negoiatible funds. When those funds have cleared the vhicle and title will be released not before and do not ask for exceptions. After all monies have been cleared the buyer can pick up in person or by proxy. If you want you could fly in and drive out. I will pick you up at the airport. If by proxy you are responsible for granting another party to work on your behalf. This will be documented in advance. Any question please ask in advance, do not leave questions or assumptions unanswered.