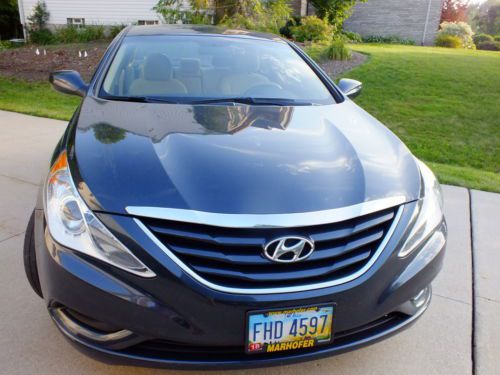 The big guns are starting to roll out at the 2013 SEMA Show in Las Vegas. This is the Bisimoto Hyundai Genesis Coupe, the promised 1,000-horsepower monster that was first shown at the end of September. We ventured across the SEMA floor to get an up-close look at this hugely powerful two-door.
The list of aftermarket parts fitted to this Genesis Coupe is extensive, ranging from that huge intercooler up front to a pair of Bisimoto/Turbonetics turbochargers to an AEM engine management system, all of which allow the 3.8-liter V6 to produce upwards of 1,000 hp. A full roll cage and Buddy Club seats and harnesses are fitted to the cabin, while a coil-over suspension blesses this Genny with some extra agility. We don't know what size Toyo R888 R-Compound tires those are, but as they're fitted to 20x11-inch wheels in back and 20x9.5-inch wheels in front, we're betting they're huge. We've got a full list of aftermarket goodies in the press release below.
We also have a full gallery of live images of the Bisimoto Genesis on the SEMA Show floor up top, so be sure to hop in and take a look at just what kind of potential can be found in this two-door Korean sports coupe.

The digital ink has yet to dry on some of our Geneva Motor Show coverage, and we're already shifting gears getting ready for the New York Auto Show. To help get us in the New York state of mind, Hyundai has released this shadowy image hinting at the refreshed 2014 Equus that it will be unveiling at the end of the month at NYC's Javits Center.
While we can't make out any major changes in this single image, Hyundai promises at least 30 updates to its flagship sedan including improvements to styling, cabin materials and ride and handling as well as advancements in advanced safety features and "driver technology displays." If we had to guess, the latter sounds like it might be something along the lines of a digital, reconfigurable gauge cluster. The only major difference we can actually see in this image are the new multi-spoke wheels, but we're sure Hyundai will be dropping some more hints before the official introduction on March 27.