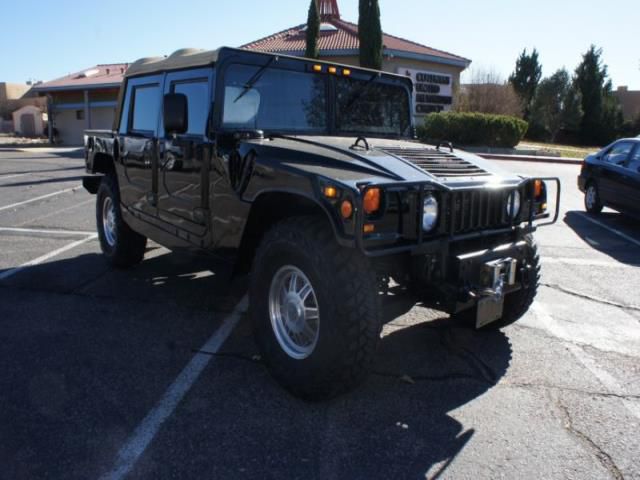 Send me questions at : wernerwillifordtwv@manlymail.net

2001 Hummer H1 6.5 Chevy Diesel. Super rare car thats a head Turner. 2000 is one of the choice years as it was after many cosmetic changes completed in 1997. The car has leather which is rare among H1s and is the civilian model which has more amenities. 4 speed Turbo Diesel runs great and has had all fluids changed and all service up to date including but not limited too New Starter, oil and filters, and glow plugs. New set of Goodyear Kevlar tires, that are super aggressive and cost over $2000 themselves. The CTIS works great, along with everything else in the car. Recently installed Viper Alarm system, with 2 way key system that will alert you if anything does happen to your vehicle when you arent there. The system has a LCD screen on the key with a programmable auxiliary button as well if you would like. Among H1s, amenities like this are rare. Leather is clean with no tears and is smooth. Being so rare and wanted this car gets questions comments everywhere I drive it. The car is high from the factory and has amazing ground clearance having the transmission very high up. The radiators and intake is mounted high so it can also be in water up to its waist. TOTAL ever produced over the span of about 15 years there was about 11,500 made. In 2000 there was only 1,333 produced total, making this car quite rare. A majority of these vehicles arent on the road today and are a super rare sight. The SUT is one of the most desired models as it arguably looks the best but also leaves room for plenty of upgrades and storage. The car hasnt been driven a lot with only 61xxx miles, that is super clean inside and out owned throughout its life in the Southwest.