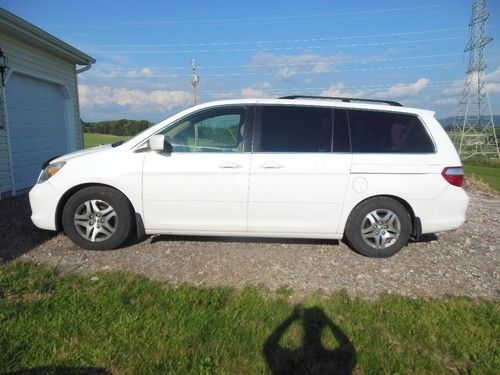 Condition: UsedA vehicle is considered used if it has been registered and issued a title. Used vehicles have had at least one previous owner. The condition of the exterior, interior and engine can vary depending on the vehicle's history. See the seller's listing for full details and description of any imperfections.Seller Notes:"No missing parts. There is wear and a few stains on the interior just due to normal use. The trunk area does have some staining and a few small tears in the rear of the back seats from hauling larger items."

For sale is a 2005 Honda Odyssey EX. It currently has 138,587 miles on it, but we are still driving it so it may go up a few. This van seats 7 and has latch on both captain seats in the second row and the middle seat in the 3rd row. It has 6 disc CD player and also comes with a DVD Monitor in the ceiling and a DVD player mounted in the Glove box. The DVD player itself could use replacing because it sometimes has difficulty reading the discs. Rear seats fold flat into the floor for lots of storage. Non Smoker.   Both rear doors are power sliding doors.  Has a hitch for towing and roof rack.
Please contact if you would like to see the vehicle before bidding or for more pictures!

105-year-old Edythe Kirchmaier is quite a woman. Not only is she California's oldest driver - she just renewed her license this January after passing the test without incident - she has a perfect 86-year driving record without so much as a parking violation. In fact, she's been driving for so long that she learned how on a Ford Model T (how many people alive today have even driven one of those, much less learned on one?). On top of all that, Edythe is a philanthropist; she's been volunteering at Direct Relief, which provides free medications for people in need, for 40 years. You may have even seen her on TV earlier this year spreading the word.
So when Edythe's 1997 minivan began breaking down, an anonymous fan did what any completely selfless person of means would: they gifted her a brand-new 2013 Honda Civic, ensuring that Edythe can continue working for the cause she loves. Check her out on Facebook - she's the social media site's oldest registered user - and scroll down to the press release for more on this heartwarming story.