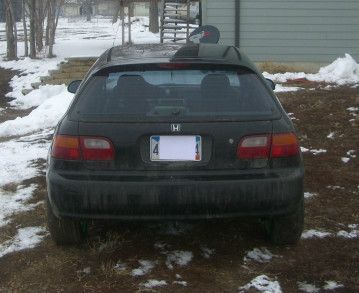 Selling Honda Civic Si 1993 with a D16 z6 motor.  Car has disc brakes all the way around. Recently painted, it is self painted but decent looking.  Just ordered new JDM headlights with side markers and fog lights.  Also HID lights for low beams only.  Brand new spoon floor mats.  Odometer reads 192000 but actual not known due to a motor swap.  Has normal wear and tear on exterior such as small dings.  Has new back corner panels done by previous owner.  I am not the original owner, purchased vehicle from an individual that did some minor body repairs.  Interior is in very good shape for the year. Any parts being replaced can be added at sale completion or sent with vehicle.  I HAVE THE RIGHT TO END THIS AUCTION AT ANY TIME.  Feel free to ask any questions you may have. PLEASE DO NOT BID IF YOU CANNOT PAY!    Thanks for viewing!!  My apologies for relisting.  I installed the JDM headlights and wanted to ensure that the posting was accurate.  I have added new pics. Fog lights havent been installed yet.  Ebay was having technical difficulties and wouldnt let me ADD pics to prior listing. Thanks for your patience!!