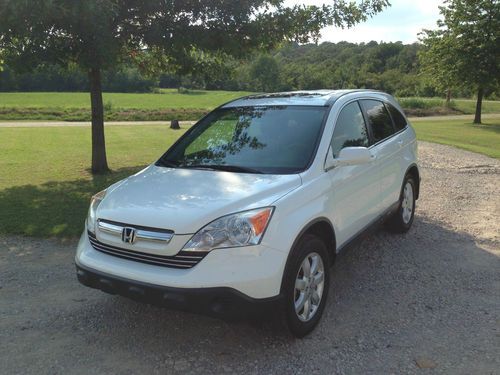 Condition: UsedA vehicle is considered used if it has been registered and issued a title. Used vehicles have had at least one previous owner. The condition of the exterior, interior and engine can vary depending on the vehicle's history. See the seller's listing for full details and description of any imperfections.Seller Notes:"2007 Honda CR/V EX-L 4WD. 127600 miles. Garage kept, nonsmoker. Leather, moonroof, AM/FM/XM satelite radio with CD and MP3. Very clean. Had 100,000 mile tuneup at Don Carlton Honda,Tulsa, OK. The only problem is TPMS (tire pressure management system) light is on on the dash display. This means one of the sensors on the tire is bad. I had one of these go bad at 85000 miles when the tires wear changed and it cost around $40 to replace. I just haven't had this one changed. Other than that, I've had zero problems with this car. I would be surprised if you could find a 2007 cleaner than this one with equal miles."