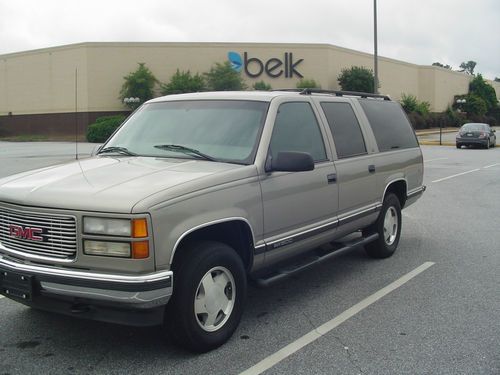 Condition: UsedA vehicle is considered used if it has been registered and issued a title. Used vehicles have had at least one previous owner. The condition of the exterior, interior and engine can vary depending on the vehicle's history. See the seller's listing for full details and description of any imperfections.Seller Notes:"There was a leak around the rear door when I bought it, the rubber seals needed cleaning."

Up for auction a 1999 GMC Suburban 1500 with 4 wheel drive. The condition of this car is very good. All the options work fine and there are many of them. Tilt, cruise, CD, AM/FM, heated seats, power door locks, power windows, power mirrors. The leather seats and the carpet are in real good condition. When I bought this vehicle the rear carpet was wet. I thought someone had left the windows down in the rain, I recently discovered that the problem was the rear door had a leak. I cleaned the rubber seals around the door and removed the leaves ect. with a vac. Since then we have had 6 inches of rain and the back has not gotten wet. Though it is still damp from earlier. I hope this problem is fixed.  The truck is already fixed up with electric brakes and came with the heavy duty hitch.. It is ready for towing. The tires are fair but will need to be replaced before too many more miles. I bought this truck back in Feb. of this year and I have not driven it a lot of miles. In May I stepped up to a 2005 Chevy Suburban . Thought about keeping them both but I seem to always drive the 05. This sale is for local pickup only. Any shipping will be up the the winning bidder. Cash, or bank money order is all that can be used as payment. Thank you for looking. Email me any questions.