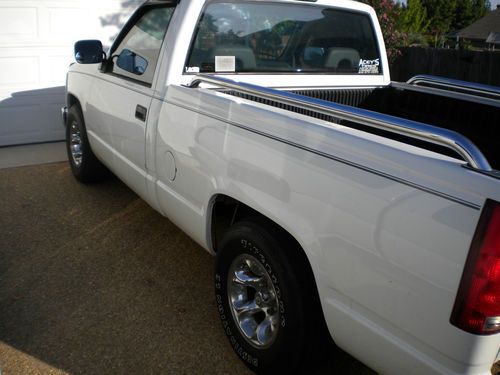 Condition: UsedA vehicle is considered used if it has been registered and issued a title. Used vehicles have had at least one previous owner. The condition of the exterior, interior and engine can vary depending on the vehicle's history. See the seller's listing for full details and description of any imperfections.Seller Notes:"LOTS OF PAINT FLAKING OFF.SMALL FEW DINTS NOTHING MAJOR"

THIS IS A V6 4.3 WITH AND AUTOMATIC TRANSMISSION, IT CAME WITH A FIVE SPEED BUT WAS CONVERTED TO AUTOMATIC IN 2006 AFTER BAD LEG PROBLEMS I HAVE.

THE ENGINE DOES'NT SMOKE OR LEAKS OIL ALL ON THE DRIVEWAY OIL CHANGED EVERY 3K. MILES AND SERVICE WHEN NEEDED FUEL PUMP JUST REPLACED 1K AGO IT HAD 256K ON IT WHEN IT WAS CHANGED NOT TOO BAD. 700R4 TRANSMISSION SHIFTS FINE AND HAS A LOCL UP VALVE FOR OVERDRIVE LOCKS UP AROUND 45 MPH EVERY TIME NEVER HAD MUCH PROBLEMS WITH THE TRUCK . I'M THE SECOND OWNER FOR THE LAST 16 YEARS BOUGHT IT USED IN 1998 WITH 77K MILES ON IT AND BEEN TOOKEN GOOD CARE SINCE I'VE OWN IT..

I HAD THE SEATS AND HEADLINER VISORS RECOVERED IN 2007 AND THE IN SIDE LOOKS VERY NICE FOR A TRUCK .

THE TRUCK IS PRETTY SOLID AND DOES'NT SHOW TO HAVE ANY BAD RUST PROBLEMS OTHER THAN THE ROOF DUE TO THE PAINT ISSUE MOST OF THE BAD PAINT IS ON THE HOOD AND ROOF, SMALL DENTS AND MOST OF THE DENTS ARE ON THE RIGHT DOOR ONE UNDER THE DOOR HANDEL AND A FEW OUTTER DINGS NOT TO BAD A VEHICLE THE AGE.

THE HEAT AND AC STILL WORKS AND THE WINDSHIELD WAS JUST REPLACED JUST HAD A BAD CRACK ENORDER TO GET A INSPECSTION STICKER NOTHING MAJOR.

FIRESTONE TIRES WITH LESS THAN 50,000 MILES ON THEM AND AMERICAN RACING CHROME WHEELS. DUEL EXHAUST WITH CHROME TIP FULL BOAR MUFFLER SOUND LIKE A V8 AND PEOPLE THOUGHT IT WAS ....