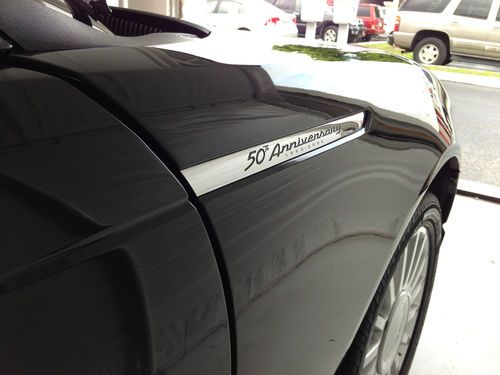 Condition: UsedA vehicle is considered used if it has been registered and issued a title. Used vehicles have had at least one previous owner. The condition of the exterior, interior and engine can vary depending on the vehicle's history. See the seller's listing for full details and description of any imperfections.Seller Notes:"FRESH PAINT JOB ON THE ENTIRE CAR DONE AT A HIGH-QUALITY BODYSHOP AND PROFESSIONALLY DETAILED WITH SWISSVAX POLISHES AND WAX TO REALLY MAKE THE CAR STAND OUT! NEW CONVERTIBLE TOPS AS WELL. INTERIOR SHOWS NORMAL WEAR FOR A CAR OF IT'S AGE. THIS CAR WAS BOUGHT WITH THE INTENTION OF KEEPING IT FOR THE LONG RUN AS A COLLECTOR CAR AND TO DRIVE ON THE WEEKENDS IN GOOD WEATHER, AS THE OWNER HAS HAD MANY CLASSIC FORD VEHICLES. HOWEVER DUE TO RECENT UNFORSEEN CIRCUMSTANCES THE OWNER MUST PART WAYS WITH THIS RARE GARAGE QUEEN. THE CAR WAS CLEARLY NOT USED MUCH ONLY HAVING JUST OVER 44,000 MILES IN THE PAST 8 YEARS! ONLY 1700 VEHICLES WERE PRODUCED IN THIS ORIGINAL COMBINATION, SO THIS IS TRULY A RARE COMBINATION THAT YOU WILL NOT FIND EVERY DAY! OIL CHANGED REGULARLY, AND REQUIRED SERVICES WERE ALWAYS DONE BEFORE THEY NEEDED TO BE DONE. EVERYTHING WORKS PERFECT IN THIS CAR, MAKE IT YOURS TODAY!"