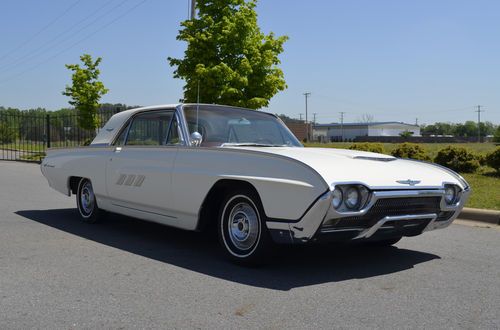 Condition: UsedA vehicle is considered used if it has been registered and issued a title. Used vehicles have had at least one previous owner. The condition of the exterior, interior and engine can vary depending on the vehicle's history. See the seller's listing for full details and description of any imperfections.Seller Notes:"Dash pad is cracked, but has a new dash pad cover. Car has been repainted. Unmatched tire sizes."

Beautiful classic 1963 Ford Thunderbird that has all original parts and original red leather interior.  Appears that car has been repainted.  The dash pad is cracked, but comes with a brand new dash pad cover.  Has complete original 390 engine.  All accessories under the hood (washer bag, radiator over flow bag, stickers) are original and in good condition.  Tires are unmatched sizes.  Rear tires have removable fender skirts.  Most of the light bulbs are original.  Car is in very good condition, and it runs and drives great.  It has had two previous owners.

Buyer is responsible for vehicle pickup or shipping.  Vehicle is being sold AS IS with no warranty.
Please call or email me with any additional questions, or for additional photos.
Jeff - 501.779.2234