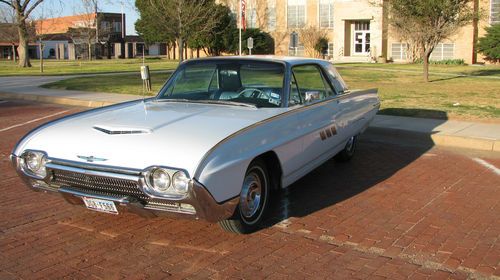 1963 Ford Thunderbird, recently rebuilt original 390, new carb., new dual exaust, new shocks, good tires, new electronic ignition, original interior in great shape, no cracks in dash or steering wheel.the only thing wrong with the interior is the arm rest on drivers side is cracked as per photo other than that, the interior is near perfect, This is a Straight NO Bondo ZERO rust Thunderbird. documentation on all work done. Air conditioner works great, everything works except the clock. Looks and runs great. Color is diamond blue, a very light blue. You would have to look a long time to find a better original car.