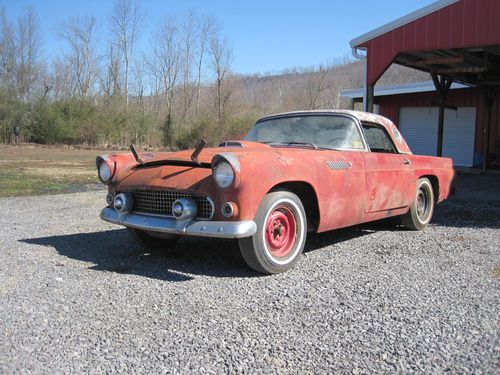 1955 ford tbird, original 292 3 speed, hard top only, power seat, all complete, very little rust, sitting in texas dry heat, last tagged in 1972, these easy fixers are hard to find if you look, frame is perfect , floors have 2 small places shown in pics, most of rust is in bottom of rear qtrs. behind wheel, inner structure under hood is perfect , under battery and around heater fan is perfect, pan behind grille perfect, all dash complete , t an c radio down to radio knobs all there, welcome to come look, delivery available, clear title in hand, for sell local so could end early, have other tbirds and parts for sell, thanks for looking , you need more info call Rod 256 441 1156

just a note engine is all complete missing carb. it has breather assembly, just no carb. i have pic of engine if you send me your email address, ebay wont let me add another pic for some reason 24 only thanks