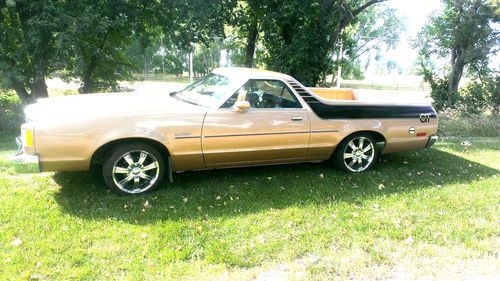 Condition: UsedA vehicle is considered used if it has been registered and issued a title. Used vehicles have had at least one previous owner. The condition of the exterior, interior and engine can vary depending on the vehicle's history. See the seller's listing for full details and description of any imperfections.Seller Notes:"Ranchero is almost completely rust free. All original with just a few dings and scratches. You can email for more detailed discriptions or pics of dings if needed.AC car but compressor is not currently working. the car has the original 302"

This car is in very good condition. Almost completely rust free. Interior is excellent. All original except the wheels and tires. Would not take a whole lot to take this one to show quality. Rare car to find in this condition. Runs and drives great. Could easily be driven home anywhere in the US.