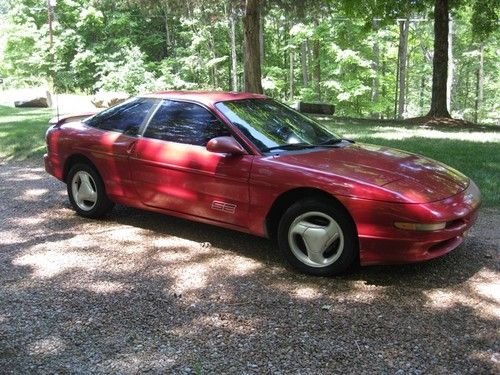 For sale is a 1995 Ford Probe SE 2.0L  with automatic transmission. The color is called Laser Red. The car comes with four extra wheels, three original OEM alloy wheels and one standard wheel with a good tire, for an additional spare. I bought this car in 1997 with 11,000 miles from a friend of my Dad's. I have been the only owner since. The engine has used synthetic oil since I bought it, and does not burn oil at all. The engine is in excellent shape.  The transmission was replaced at 113,000, so it only has 41,000 miles on it and is in great shape. The engine and transmission and the car in general runs great, this car has been maintained at the dealer as per the suggested maintenance schedule, and has had all major parts replaced or serviced during its lifetime one or more times, including: New rotors, 3 tune ups w/t new plugs and injector cleaning, coolant flush and replaced hoses and all belts, transmission fluid change, timing belt and tensioner, MAF and speed and oxygen sensors, both front axles, both struts, manifold gasket, and various additional small repairs. This car has been maintained by the dealer only. The entire muffler section was replaced once, works fine has some rusting now.   The pictures will show the condition of the interior and exterior, the exterior has some paint fading in a few areas, 2 light impact dents on the left side, otherwise in great shape. The headlights will come up sometimes, sometimes they wont and I have to hand crank them up. The gas gauge doesn't work, i use the trip odometer it will easily go 350 mile son a tank of gas, so I fill up when it hits 300. The drivers side window is fixed in the up position and cannot be lowered, the bracket that holds the window needs replacing. The engine light will occasionally come on for 10 seconds or so, then go off. The dealer said it shows "sporadic" codes, and is not a engine issue but a sensor that occasionally reads incorrectly, it has been this way for 6 years and the car runs great. The air bag light will occasionally blink too. The car has always passed missions testing.  On the interior, the AC works great, all the environmental controls work great, the cruise control works great, horn, parking brake, radio all work great. Power locks and windows work great, except on drivers side window as mentioned before is fixed in up position. The spare tire is in great condition and holds air fine. The original "lug-nut key lock attachment" for tire-iron is included, along with original jack-stand. There is a special attachment lug-nut key on each tire, that prevents theft. Only the dealer can replace this key, so it is very valuable to have. Please e-mail with any questions. I am located on exit 31 on I-24,  in Joelton TN. Cash, or cashiers check only for pymt.  This is for local pick-up only I will not ship this car.