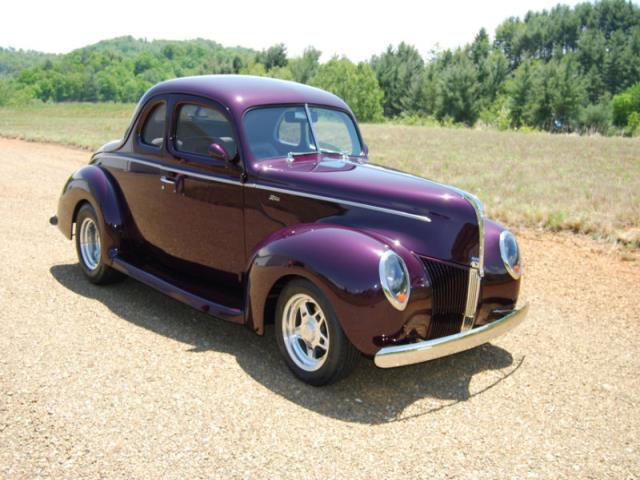 Please feel free to ask any questions or if you need more pictures : digohflorianhenrie@netc.it This 1940 Ford Standard Coupe is a show quality vehicle. The exterior body color is Hawaiian Orchid - in excellent condition - with a 2-tone grey leather interior. The engine is a GM350 Tuneport with fuel injection diagnostics built-in and a GM700R4 overdrive automatic transmission. Walker radiator (car runs cool). Sanderson headers into stainless steel exhaust pipes and mufflers, with Megs polished stainless steel exhaust tips. This vehicle has a Lokar shifter, a Lecarra steering wheel. The frame is fully boxed, and is also narrowed in the rear to accept wider tires. This vehicle has 4-wheel Disc Brakes: front - GM Intermediate, rear - Wilwood. The wheels are Weld. The tires are BF Goodrich TA: front - P195/60/R15, rear - P275/60/R15. The driveshaft is Inland Empire Custom. Air conditioning is Vintage Air and blows cold. The wiring is Ron Frances. The battery box is stainless steel, with an Optima battery, with a power disconnect switch.