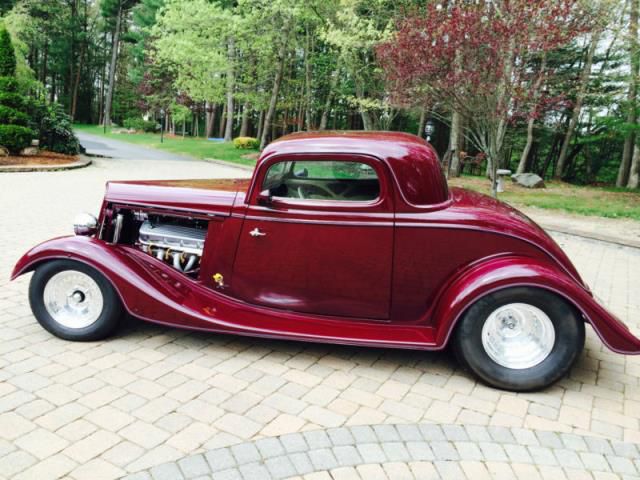 BEAUTIFUL 1934 FORD THREE WINDOW COUPE. 2 DOOR, FLAWLESS BURGUNDY EXTERIOR, TAN AND BURGUNDY INTERIOR, STERIO WITH CD PLAYER, TILT WHEEL, VINTAGE AIR, EXCELLENT 396 CU IN CHEVROLET ENGINE CHROMED OUT, ALL NEW TIRES AND WHEELS, EXHAUST, FIBERGLASS BODY, ETC CAR NEVER SEEN THE RAIN ALWAYS GARAGED, MUST SELL WIFE IS ON MY CASE LOL 401 641 4141 Billy** this car is hot it really turns heads when they hear it and look at it, this build was done right, with time and work and money would be over 70 k this is a steel and it is in beautiful condition exterior , interior and chassis and componets sso hurry and buy this bad boy what can you buy for 33 k you can't even buy a maxima for that price