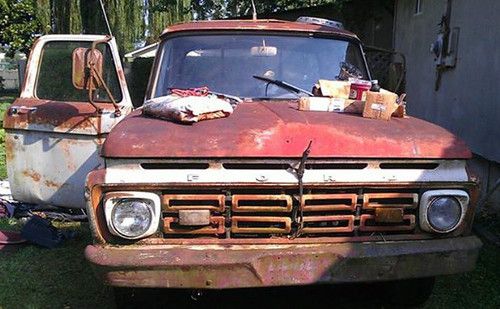 Condition: UsedA vehicle is considered used if it has been registered and issued a title. Used vehicles have had at least one previous owner. The condition of the exterior, interior and engine can vary depending on the vehicle's history. See the seller's listing for full details and description of any imperfections.Seller Notes:"Clean title. Long wheel base. The last time it was drove was in 2002. The last time we tried to start it gas was coming out of the carburetor. We think the float was stuck but never messed with it. It would be a nice truck for someone to fix up. We have owned since 1984."

Clean title. Long wheel base. The last time it was drove was in 2002. The last time we tried to start it gas was coming out of the carburetor. We think the float was stuck but never messed with it. It would be a nice truck for someone to fix up. We have owned since 1984. The bed has a lot of rust on it. It hasn't been in a wreck to my knowledge. I was told the engine was rebuilt before I got it but I'm not sure about that.

Shipping and payment: pick up only and paypal