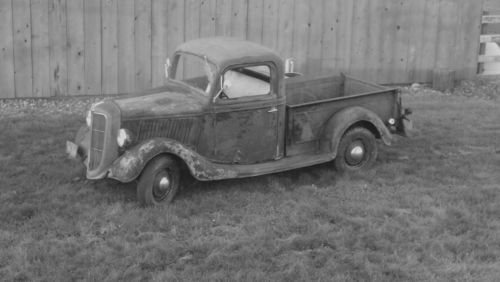 Here is a chance that does not come around very often . This truck was driven  and stored back in 1968 or 69. Just a few spots of rust in lower door jams and stake pocket, easy fix stuff. We can do the patches for extra fee if buyer likes. Clutch and brakes work nice but motor is frozen. We have not tried to free it up .  Lots of choices with this pickup.  Fix the Flathead drive it like its is,or do full restore. The pickup you see in background is my 36 I will never sell it. Just to much fun. Keep in mind most of us that have this kind of truck will  keep  them. That's why this is a rare chance to buy this pickup. Take a good look at this pickup ask your self when a chance like this will come around again........  Never!  If you want to have the #1 most sought after pickup. Get to bidding.
THIS PICKUP IS FOR SELL LOCAL AND WILL BE SOLD AT ANY TIME IF RESERVE HAS NOT BEEN MET.
For more info  give me a call anytime 503-991-1705 Thanks for your time, Jim.