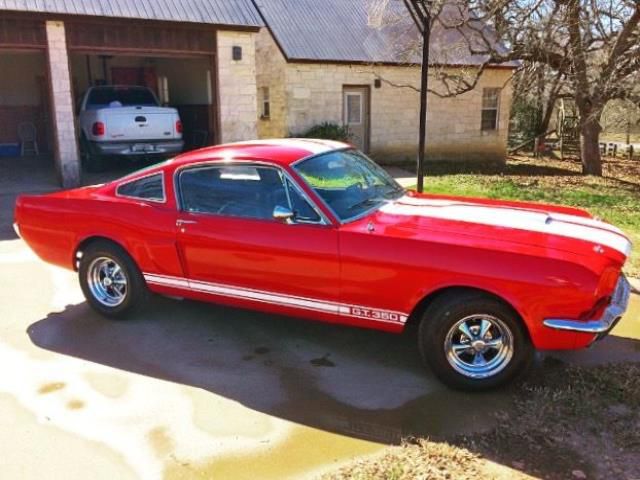 GORGEOUS 1965 Mustang Fastback GT 350 Tribute car is being offered for sale. This is my dream car, but its holding me back from buying a house which I have the opportunity to get if I sell it :/ This car was COMPLETELY restored from top to bottom several years back, and remains in excellent condition. At restoration it was updated to tribute a 1966 Mustang Gt 350. At this time a brand new 302 engine was installed. This thing has way more kick than what you may expect from a 302 thanks to the .40 over bore, forged pistons, competition 289 duration lift cam etc. etc. etc. This 450 HP engine is bolted to a Ford C-4 transmission with B.M quick shift ratchet shifter. Summit turbo exhaust sounds heavenly at idle as well as cruising the roads! The interior of the car is almost flawless. It should exceed expectations (as long as they are realistic.) All upholstery, and interior in general was completely redone/replaced at restoration. Since the car has not sat out in the sun and has next to no fading or anything. I would rate the interior 9 or better on a 1-10 scale. Note: the original radio may work, but I dont believe its hooked up. The exterior of the car is in great condition as well. There is no rust on the car, and the underbody looks great. Suspension and all has been replaced and shows great. The paint is in very good condition but was not done yesterday. All in all I would say the paint on the car is about an 8 on a 1-10 scale. It looks great with no major scratches or dents, but doesnt have the shine you may want for national car shows. It will win some local car shows and grab attention like crazy though! The car has only been driven an estimated 800 miles since restoration! It is taken out weekly to keep things running smooth and charged up! It runs right at 190 degrees and has absolutely NO known mechanical problems! I’d drive it across the state no problem it is 100% reliable. This may be your chance to get one heck of a car at a steal of a price! Please bid to win, but only win if you plan to pay!! If you would like to come inspect it before auction end just send me your number in a message and I will give you a call asap! VIN code reads 5F09C390591Data Plate reads 63AM2607A25F6 5= 1965 Model YearF= Dearborn Assembly Plant09= Mustang, 2 Door FastbackC= 289 CID Engine with 2 Barrel Carburator390591= Consecutive Unit Number 63A= Mustang, 2 Door Fastback with Standard Bucket SeatsM= Wimbledon White Exterior Finish26= Black Vinyl Interior Trim07A= 1/7/65 Production Date25= Richmond District OrderF= 2.80 Locking Real Axle6= C-4 Automatic Transmission