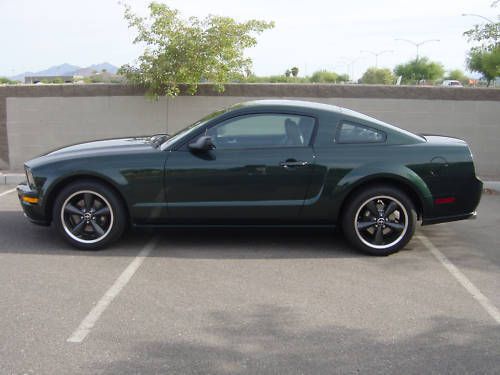 Feel free to ask me any questions about the car : eddyehhampon@topaddress.com .

There were 5773 Bullitts produced in 2008, 4377 were done in Dark Highland Green
7500 VERY CAREFUL miles - most of which were added by a 59-yr old driver (me) who got his hot-rodding done with the
last Corvette he owned and bought this as a work of art - not a daily driver. My Dad took me to see Bullitt when I
was a youngster, and I never forgot it. When I saw the introduction of this tribute car, I had to have it. No
scoops, no spoilers, no stripes - oh my! Very subtly understated, just like the king of cool himself.
The car was so perfect when I got it, I just had to keep it that way.
Early build number: 0545
Rare options: The car was custom-ordered with Navigation system, Ambient Lighting, and Hands-Free Phone - the Ford
Mobil-Ease Bluetooth system - installed at the factory These options alone added another $2980 on top of the $3310
Bullitt Package in the sticker-price. I have not seen another Bullitt with all three of these options.
Always garaged and covered
Never seen any bad weather
Every single engine startup/trip is logged along with trip miles and significant events (oil changes, etc.) in a
spreadsheet I will provide with the car. Every single mile is documented since I have owned it.
Still has the clear plastic peel-off protectors on the doorsills
Still has new car smell
The entire interior is perfect - no sign of wear anywhere
Leather Steering Wheel has NO shiny spots on it - just like new
No BURNOUTS, no REDLINING, no POTHOLES, no CURBS - if I ever found myself behind a cement mixer or garbage truck, I
took immediate evasive maneuvers to avoid
Car was never driven over 2,000 RPM until thoroughly warmed up
A/C was always cut-off several blocks from home to let the condenser cool down and the freon/oil settle prior to
shutdown
I know, I was a little bit crazy about this car
Driven just enough to keep all systems in good condition and all seals lubricated, etc. Every trip was a blast and
still felt as if I was just driving off the showroom floor.
Extras and Goodies that will be included with the car:
Framed and Signed Bullitt Movie Poster - 40" x 28" with five signatures from actors that were in the movie
including Steve himself - with Certificate of Authenticity
The other signatures are from:
Jacqueline Bissett
Robert Duvall
Robert Vaughan
Simon Oakland
High-Quality Model of 1968 Bullitt Mustang in display case
High-Quality Model of 2008 Bullitt in wood/glass display case
Nice model of 1968 Black Charger in display case
Framed Original 2008 Dealer poster - 40" x 32" - the original buyer insisted on taking this from the Dealer's
showroom wall before he would complete the purchase.
Ford new car brochures and postcard Bullitt advertisements
Repro metal California License Plates - Black/Yellow - from both the Mustang (JJZ 109) and the Charger (RDR 838)
ALL Documentation included - every little piece of paper since new including little cards hanging from interior of
car, etc.
Several Car Magazines from 2007/2008 announcing the coming and arrival of the Bullitt
Framed Certificate from Ford Performance verifying VIN and build number as a genuine Bullitt
Framed original window sticker
Two framed Steve McQueen Bullitt Movie Posters
Bullitt T-Shirt - too small for me anyway
Additional Info:
Oil Changes with 100% synthetic performed at least annually - regardless of mileage
Fuel additive used to prevent any varnishing of fuel components - Archoil
Battery Tender Jr. bolted directly to battery terminals is included - still has original battery in perfect
condition
Navigation Update performed in 2015 - latest Ford Disc was purchased and installed
Still has some of the little rubber casting spikes on the tire sidewalls
RPM-Matched every shift - up or down
Paint finish is like glass with no imperfections. Only mark on the car is on the rear bumper when I was pushing the
car back and bumped into the garage door and one of the hinge bolts pressed into the paint a little bit (see last
two pictures.)
Never taken to a car-wash - always hand-cleaned/polished/waxed - no swirls, etc.
If you are looking for a pristine example of the breed, look no further - this is IT
No disappointments
Car has had 3 owners - the original buyer was a huge Bullitt enthusiast who paid a large premium for one of the
earliest cars, and was insistent on keeping the car perfect. Fortunately, he was also very meticulous about keeping
EVERYTHING to do with the car, even sale paperwork, registration documents, recall maintenance, service history,
etc. The second owner was just as fastidious, and drove the car primarily to car shows and never used it as a
driver. I bought the car from him with 2950 miles on it, and it was everything he said it was. Since then, it has
not grown any older if I could help it.
I have been more of a caretaker for it than a driver and now it is time to pass that responsibility on to someone
else.
That privilege and responsibility will cost you $25,000 and well worth it