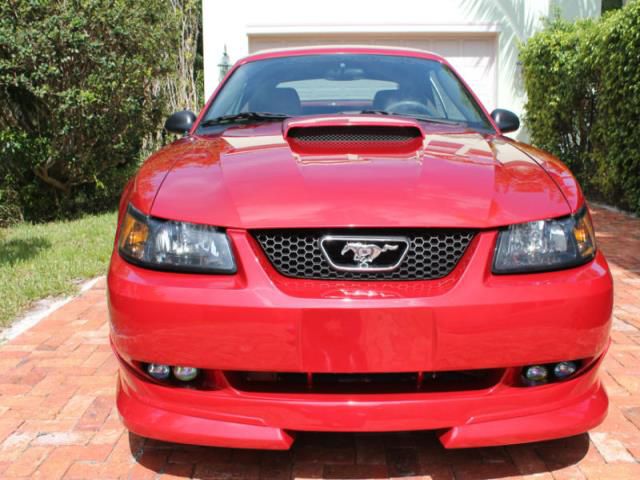 Mustang is a great deal, as most will agree, some lenders will not loan 100% value on a 2001 model. Thus his dilema. So please, we ask that you have funds in place, or will have in place within 7 days after the close of the auction. How, let's get to the good stuff! This Mustang has remained a Florida-only vehicle its entire life, and spent 98% of its life in a climate-controlled garage. It is like new in every way. Only 22,251 original, pampered and loved miles. This is the rare opportunity that you have been waiting for....in fact, dreaming of! Perfect high-gloss Magnetic Red Metallic exterior with Light Beige leather with designer inserts and stripes. The finish is absolutely stunning. In fact, the interior looks like new as well. Supple leather, perfect carpets. Just what you would expect from a 22,000 mile creampuff. High-power factory audio system, staggered factory 18-inch wheels, (with huge 295/35ZR18 tires in the rear and 265/35/ZR18 in the front), power seat and keyless remote entry are some of the options. I have to admit, I love this incredible sports car. Looks new, runs and drives and performs new. And if you concentrate really hard, has a hint of that new car smell still remaining!! Now the best part, we just spent 7,256.14 at Mustang Specialties in Pompano Beach, FL (South Florida's Premier Mustang Speed & Specialty Shop), outfitting this Roush Mustang with high volume Ford Racing oil pump, forged pistons, custom head work, polished crank and all the other good stuff that helps create over 500 awesome horsepower out of this Show Car! Only 20 test driven miles since the complete performance modifications. The performance and the condition of this Mustang is second to none.