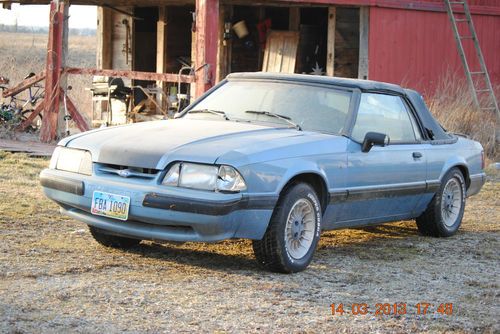 This Mustang is in Great Condition for it's age ...
We purchased it for our kids to learn to drive with, decided different after the first one was involved in a rollover - end over end accident in an SUV...     we decided not to proceed with a convertible and new drivers.
The car was in running condition when we purchased it but was told the transmission had a blown seal. The transmission was removed and is included in the sale.
We have never started the car ...  but have knowledge that it was a daily driven car. Very little rust as shown in the pictures and the top will need replaced. Has been Barn stored for past 2 years. Feel free to e-mail or message me with any and all questions and I will answer as knowledgeable and quickly as possible. I can e-mail you any requested pictures
The front end was backed into by a Police Car but there is no metal Damage ... There is included a new front (see Picture)
The actual mileage is unknown but I would imagine that it is accurate judging from the condition and knowing the man we bought it from ...              his Mother bought it new ... We have clear Title in hand