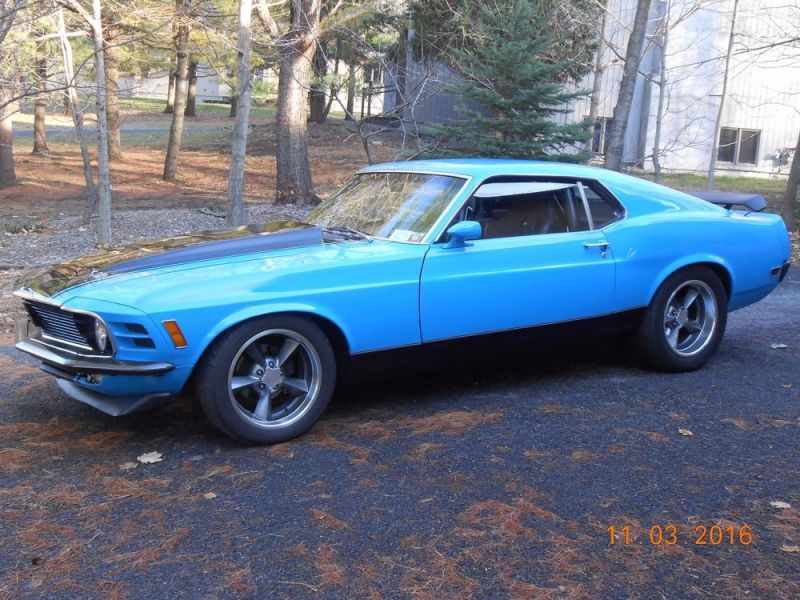 Just email me at: chiacggrollimund@leedsfans.com .

I have owned this beautiful Grabber Blue 1970 Mach 1 for over 6 years. It's been driven to shows and loved, ever
since the car was delivered to me! Last summer I decided to seriously upgrade my Mustang to a Pro-Touring car. I
just completed this professionally built, one of a kind muscle machine and have logged approximately 100 flawless
miles.
Previously, the car lived in Arizona , has original body, no rust ever, original glass, rubber and trim in perfect
condition. Car was built with rare drag pack, it may be the only non-Boss or Cobra Jet Mustang produced. Also, has
some race history in the early 70's, then car was stored inside for 25+ years!
The engine is of unique design and build, with many custom made parts. Example: The custom made AFR heads will
support 1000 HP. The Crane cam was specially ground for this particular application. Engine parts alone, totaled in
excess of $20,000. The solid/hydraulic lifters are rated for 8500 RPM. The engine builder I have always used since
1971, is quite well know for it's excellent reputation, especially Ford engines! This 408 cu. in. Windsor stroker
is rated at 650 HP @7000 RPM ( conservatively rated ) and has 8-stack Electronic Fuel Injection throttle bodies.
The engine runs great on 91 Octane pump gas, and is very streetable at any RPM. Trans is a TKO 5-speed, with
hydraulic clutch and the 8500 RPM light weight fly-wheel allows for super quick revs. Total Control Products:
power rack & pinion with high RPM race pump, tilt steering column, totally adjustable tubular upper & lower control
arm with adjustable coil over springs and shocks, ect.