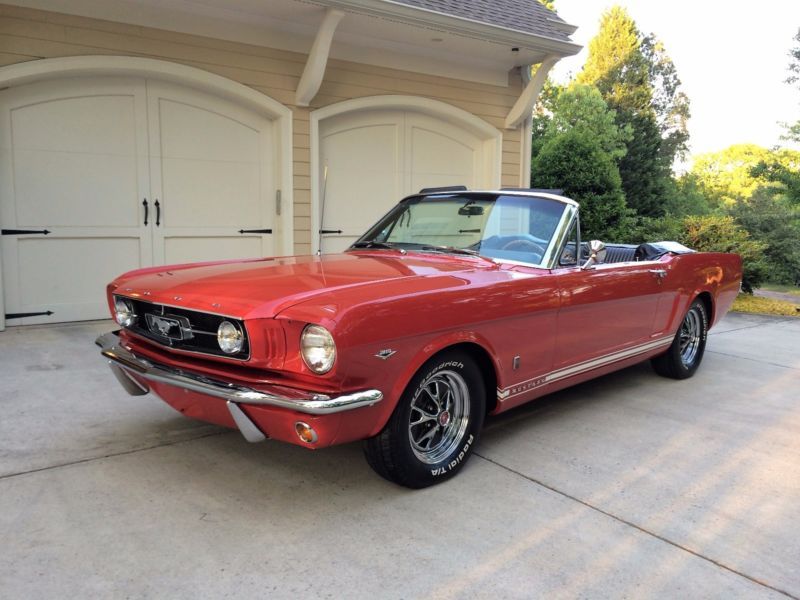 This is a great Mustang Convertible. I've owned this car for almost 9 years. It's been a joy to own and is not
problematic at all. I'm only selling it because my family is moving on to the next stage in life and we're buying a
boat. Great color: Red with black interior and a white top. The car is not flawless, but pretty close to the naked
eye. In the spirit of full disclosure, the flaws are a few tiny nicks in the paint, carpet is a little faded from
the sun, the wood on the steering wheel was repaired before I got it, and a few snaps are missing from the
convertible top boot cover. Those are the only things I'd address on this car. About 2 years ago, I had new brakes
installed, to include new discs in front and a brake cylinder; new battery; a new coil; new distributor; new Holley
4 bbl carburetor, new radiator and fan; and a new high powered radio that is designed to look like the classic Ford
radios (the radio has Bluetooth for music and hands-free phone calling, as well as a USB port); new Edelbrock
shocks and BF Goodrich tires were installed about 7 years ago and have less than 500 miles on them. The electric
top works great, the trunk is nice and clean, the car shifts nicely, and starts right up. The engine has the Cobra
valve covers and air cleaner. No A/C or power steering. The car originally did not come with seat belts in the back
seat. I had them installed in the back seat to factory specs and replaced the ones in front too so they would
match. Pretty much everything has been replaced on this car during the 90's restoration and my ownership. It is
ready to enjoy. I have a clear title in hand and current vehicle registration. This vehicle is being sold as-is. I
also have most of the receipts for the major work done to the car.