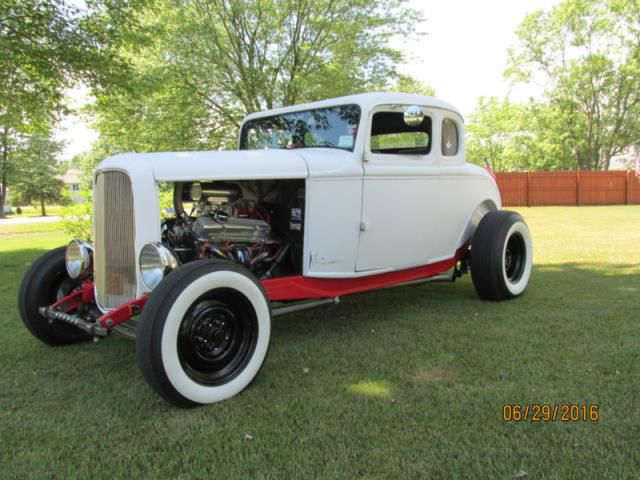 The 1932 FORD Coupe. This incredible rod has been driven and enjoyed for over 4800 miles. The motor is dated as a 1969 bored 30 over corvette 350. Has an HEI ignition, stainless steel block hugger headers and all stainless exhaust. The transmission is a 350 which shifts true and perfectly, with Lokar shifter. The block is a 4 bolt main and the rear end is a Ford 9 inch with Highway gears. 4 bar set up with Aldan adjustable chrome coil overs . This is a fiberglass body, custom frame, 32 rails. I have driven this car 70mph on the highway over 300 miles to a super cruise and back. (flawless) 4 wheel disc brakes with black rims wrapped in Coker Classic tires. The white finish is cleared with a flat clearcoat and has a patina look. Not primer so yes you can wash this car like any other car. Brand new distressed leather two tone interior speaks volumes.