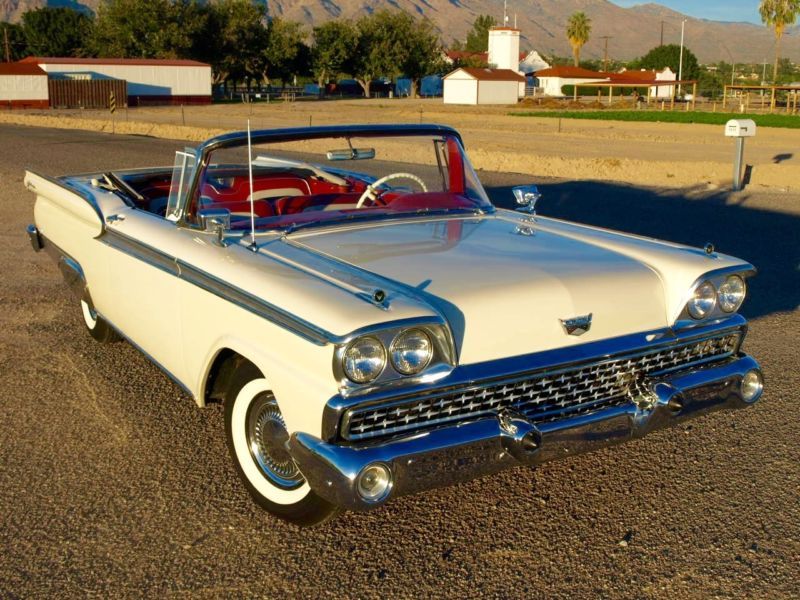 This Ford was purchased new by Genero Forte at the Vincent Montone dealership in Hazleton, Pennsylvania on March
21st, 1959, and it remained in the original owner's family until 2014. The car was always stored indoors, and has
covered just 30,333 miles since new. It is in remarkable original condition, and retains 60% of the factory
applied paint, as well as the original seat covers, door panels, carpeting, and floor mat. The interior surfaces
show minimal wear, constant with the miles, and the entire car feels like a well maintained two year old
automobile. All of the switches, windows, and latches feel solid, with almost no play or wear. The steering wheel
retains it's original white paint, with a few spots just beginning to wear through after 30,000 miles. I have
inspected this car thoroughly, and every part of it confirms the low mileage and excellent care it has received
since day one. The floors and trunk are solid, and still retain their original paint under the carpeting and trunk
mat. The door panels are in superb condition, with virtually no wear on the armrests, and no warping on the
panels. All of the windows crank up and down smoothly, and the side glass and windshield are original with the
Ford scripts. The weatherstripping is all original, and is still soft, retained by the factory brush-on glue. The
top well is excellent, along with the original top boot (not shown in the pictures, but included with purchase).
The power top works very well, with no known leaks in the hydraulics. All of the lights are functional, and the
horn and wipers both work. The heater works well, along with the original six tube AM radio. This car is equipped
with the desirable four barrel Thunderbird 352 V8, which was the largest engine available in the Galaxie for 1959.
It also has an automatic transmission, but manual steering and brakes. This car was stored for many years, and
returned to the road in 2007 by the original owner's family. The engine was completely rebuilt at this time, and
receipts for the machine work and installation go with the car