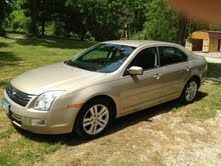 Very nice vehicle,clean inside and out. Non- smoking older driver.  Had minor damage to unibody caused by careless tow truck driver. This damage was repaired by Ford dealer and is not an issue. As per Auto check not in an accident.This is a very nice car with leather heated power seats, cruise, tilt,am/fm multi disc cd with mp3, auto temp control,heated mirrors, auto headlamps. Everything works with no issues, maintenance up to date, tires excellent, brakes done about 6 k ago. My wife has retired and we no longer need the extra vehicle.