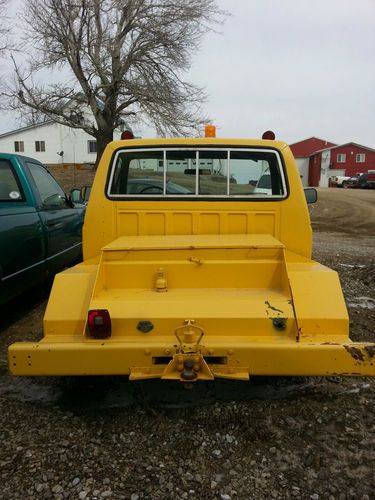 1982 Ford F350 2WD Bobtail Tow Tractor "FIRM ON PRICE" engine,transmission,tires,new battery worth price alone. Bought the truck at Govt. auction was going use this for project I'm working on. Decided to go different route. I'm selling for exactly what I have in it. Another truck like this one with more mileage and cosmetically worst went for 200.00 more at auction.It was used to pull a tram trailer at special events a few times a year by the Joliet Regional Airport. One special event was to shuttle nascar drivers and people to the Chicagoland Speedway. Comes with a really cool Richard Petty story too. This unit is perfect for pulling floats in parades and pulling hay racks...This unit is governed, the vehicle's max speed is approx 35mph. 4.9L 6 cylinder Gas Engine. Good engine if your looking at this truck just for the parts. The 4.9 6 cylinder engine for this period has earned the terms "bulletproof" and "indestructible" by many. There are numerous claims of those who have purposely sought out to destroy one through abusive use, and were unsuccessful in doing so. Auto Trans. Good runner, Brand new battery, Drives okay for it's intended purpose.Odometer 26580. Hours 4497.Front Tires: 8.75R16.5LT, tires have under 200 miles. Rear Tires: 8.75-16.5LT, both rear tires good.Driver door has damage at front by hinges. Seat worn and torn driver side - see picture.Decals have been removed, impressions remain. Cab has rust at corners and floor.Missing one rear tail light and tail lights and break lights don't work. Could be fuse.This piece of equipment is (SOLD WITHOUT TITLE). A bill of sale will be provided.