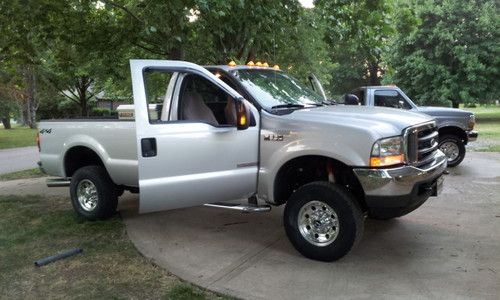 2004 F350 XLT Ford Super-duty pick up with 126,000 miles. 6.0L diesel with automatic transmission. I had both the EGR system deleted and new oil cooler installed at 60,000 miles. This was done for preventative maintenance because I know the issues the EGR systems can cause on diesels. Truck has never been chipped or worked hard. Never had any issues with this truck.  I kept a maintenance record of every oil change, fuel and air filter replacement, and so on since I purchased the truck in 2005 with 20,000 miles.  Always used motor-craft oil and filters.  Exterior and interior are flawless with the exception of one dent below the rear passengers tail light (see pic). I would rather keep the dent than to have body work done. Never driven in salt.  Clean car fax and title in hand.

After-market:
EGR delete kit
Magnaflow muffler and Cat Delete
B&W gooseneck ball (bought to pull a horse trailer one time)
Firestone airbags
2" front leveling kit
warn manual locking hubs (had an issue with the automatic hubs disengaging so I installed manual hubs so I would know for sure if they were disengaging)

Feel free to email me with questions.