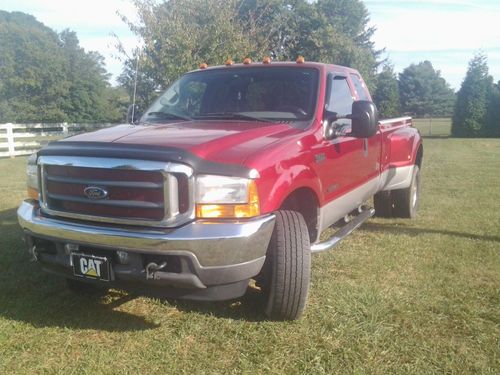 Condition: UsedA vehicle is considered used if it has been registered and issued a title. Used vehicles have had at least one previous owner. The condition of the exterior, interior and engine can vary depending on the vehicle's history. See the seller's listing for full details and description of any imperfections.Seller Notes:"The interior is like-new. The seats and carpet have been covered and have zero wear. The truck has always had great service and care since bought brand-new. The exterior has a few small dings and scratches but shows extremely well. Bed has had a rhino-liner since new. It has never been wrecked or abused in any way. Truck has brand new tires and brand new exhaust. Also, it has brand new brakes. The truck runs extremely well and is in great over-all condition. It was used to drive back and forth to work."

2001 F-350 with 7.3L engine,6speed manual transmission, 4x4 with 4:10 gears. Truck has had great care and service. The interior is like new. The seats and carpet have been covered and have zero wear. Exterior has a few small dings and scratches but shows extremely well. Bed has had a rhino liner since new. Truck has never been wrecked or abused in any way. The truck runs very well, no mechanical problems at all. Has new exhaust system, new tires and brakes. Truck was driven to and from work 20 miles round trip. For more information you can contact me through email  at Bshowacre.bs@gmail.com