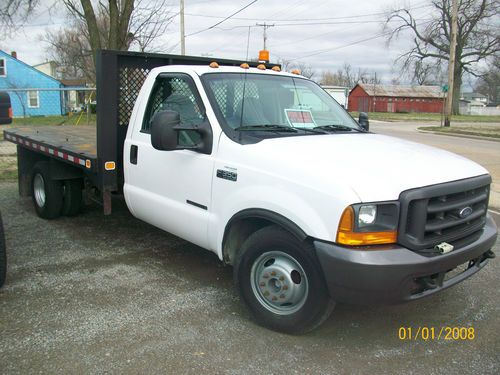 You are looking at a 2000 Ford F-350 dually 2 wheel drive with the popular 7.3 Powerstroke diesel with a 6 speed manual transmission. This truck has only 112304 miles and is ready to work. A 10' steel Knapheide flat bed makes for easy hauling and towing. It has a fold down gooseneck ball on the bed and a heavy duty reciever hitch on the back bumper. DOT reflective stripping wraps the bed for added safety and a working amber strobe light on the all steel headache rack. You will not find a cleaner truck than this one. 6 new steel wheels with 6 new 10 ply tires make this truck ready to hit the road with whatever you put on or behind it. The interior is gray with a rubber floor and a vinyl seat. This truck has been fleet maintenances and is ready to go. Exterior condition of the vehicle is good with one small dent on the bottom of the driver side front fender.

A $1000.00 deposit is required within 48 hours of action end with the reamaining balance paid in full within days of auction end via cash or certified funds.

Delivery is available upon request at a rate of $3.00 per loaded mile.