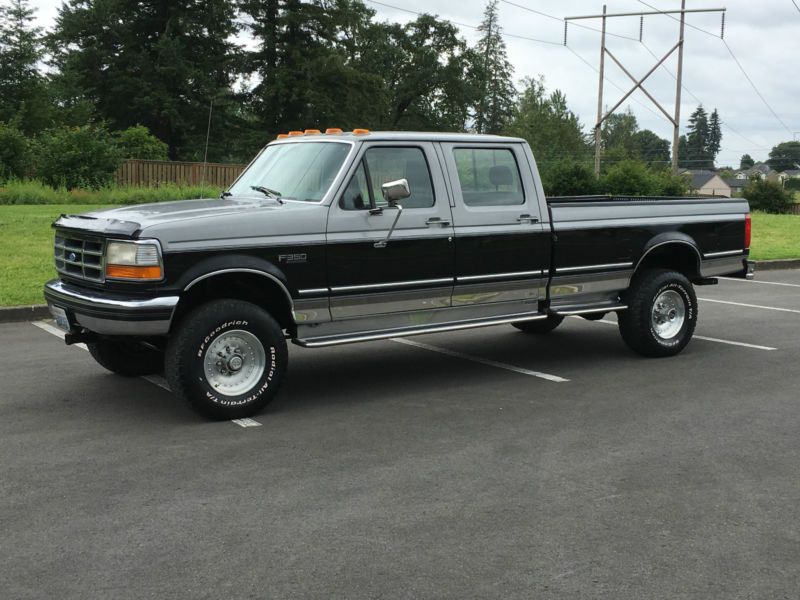 !!! AUCTION !!!
HIGHEST BIDDER WILL WIN THIS BEAUTIFUL ALL ORIGINAL F-350 4'WHEEL DRIVE PICKUP !
ONCE THE RESERVE IS MET !!
HERE IS YOUR CHANCE TO OWN THIS BEAUTIFUL TRUCK
..EXTREMELY RARE 4X4 AND VERY HARD TO FIND ONE IN THIS CONDITION WITH THESE SUPER LOW MILES
HERE
IS
A
100%
RUST FREE
1992
FORD
F-350 1'TON
XLT
CREW CAB
4-DOOR
4-WHEEL DRIVE
LONG BED
PICKUP
POWERED BY A
7.5'LITER 460 8'CYLINDER ENGINE!!
THAT HASN'T EVEN BEEN BROKEN IN YET
HAS A
AUTOMATIC TRANSMISSION
THAT SHIFT'S VERY NICE AND SMOOTH
WITH
YES NOT A MISS PRINT
( ONLY 31,633 ORIGINAL MILES )
THIS IS A OLDER ADULT OWNED F-350 4WD PICKUP
IT'S A NON SMOKER NON PET OWNED VEHICLE
EXTREMELY NICE AND CLEAN INSIDE AND OUT
WELL CARED FOR AND ALWAYS SERVICE SINCE 1992
AND SERVICE REGULARLY SINCE IT WAS NEW TO THIS PRESENT DAY
OIL HAS BEEN CHANGE EVERY 3K MILES
COMES WITH ALL THE ORIGINAL BOOKS AND MANUALS
HAS
A
CLEAN HISTORY
NO ACCIDENTS
NO DENTS - NO SCRATCHES
MIGHT FIND A MINOR DING OR TWO HERE AND THERE
ITS ALL STOCK - ALL ORIGINAL - ALL FACTORY!!
HAS ALL FACTORY OPTIONS
POWER DOOR LOCKS
POWER WINDOWS
MANUAL MIRRORS
CRUISE CONTROL
TILT STEERING WHEEL
AIR CONDITIONING
FACTORY FORD AM-FM CASSETTE PLAYER
POWER STEERING
REAR SLIDING WINDOW
RUNNING BOARDS
BED LINER
DUAL FUEL TANKS
NICE ALUMINUM 16'INCH ALLOY WHEELS
GOOD CODITION BFG'S ALL TERRAIN T/A TIRES
ORIGINAL SPARE TIRE LOOKS LIKE IT NEVER BEEN USED
TOWING PACKAGE
WITH
FRONT TOW HITCH AS WELL
HAS
NICE CHROME BUMPERS FRONT AND REAR
THIS 4'WHEEL DRIVE
RUNS, DRIVES, STOPS, TURNS AND LOOKS GREAT!
BEEN KEPT UNDER CAR PORT COVER
IT IS IN EXCELLENT CONDITION!!!
INSIDE AND OUT
FOR BEING OVER 24 YAERS OLD
GREAT RUNNING AND DRIVING TRUCK
A REAL CREAM PUFF
DON'T SNOOZE AND LOSE
WILL NOT LAST LONG
CALL ROBERT @ 971-235-6471 WITH ANY QUESTIONS
OR TO BUY THIS TRUCK NOW
I MAY END AUCTION AT ANYTIME SINCE THIS VEHICLE IS FOR SALE LOCALLY
I HAVE A CLEAR AND CLEAN TITLE IN HAND