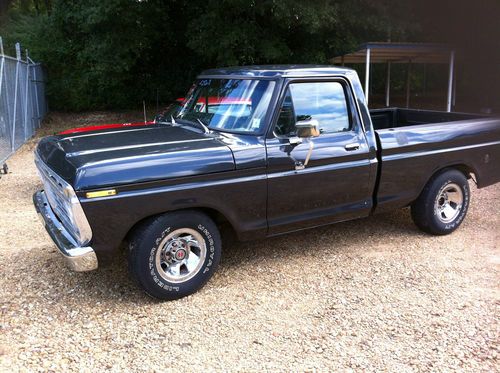 Condition: UsedA vehicle is considered used if it has been registered and issued a title. Used vehicles have had at least one previous owner. The condition of the exterior, interior and engine can vary depending on the vehicle's history. See the seller's listing for full details and description of any imperfections.Seller Notes:"HERES A NICE OLD TRUCK THAT COULD BE REAL NICE WITH JUST A LITTLE WORK, TRUCK HAS NEW 302 V8 WITH REBUILT AUTO TRANSMISSION WITH DUAL EXHAUST, LOWERED 3 INCHS, SMALL CAM AND SOUNDS SWEET, TRUCK RUNS AND DRIVE GOOD, HAS HAD REPAINT AND IS SLICK BUT DOES HAVE SOME CRACKS AND FLAKING, WOULD MAKE A GOOD DRIVER TO WORK OR JUST PLAY."

THIS IS A GOOD RUNNING VERY SWEET SOUNDING PU, COULD BE MADE INTO A VERY NICE SHOW TRUCK OR JUST DRIVE IT LIKE IT IS, THE ENGINE AND TRANSMISSION  HAS 18,000 MILE ON IT SINCE REBUILD, IT HAS A SMALL CAM THAT REALLY GIVE IT THAT SWEET SOUND, HEADERS AND DUAL EXHAUST, SOME CHROME ON THE ENGINE, TRUCK IS NO SHOW TRUCK BUT IS VERY DEPENDABLE. HAS AFTERMARKET GAUGES AND RADIO, SEATS ARE IN GOOD SHAPE JUST NOTHING  FANCY, CARPET IS NEW.  EMAIL ME WITH ANY QUESTIONS AND I WILL TRY TO ANSWER. THANKS