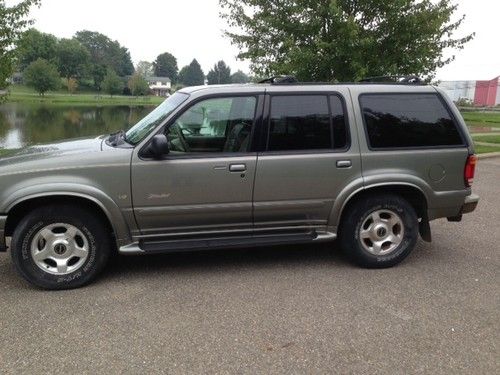 Condition: UsedA vehicle is considered used if it has been registered and issued a title. Used vehicles have had at least one previous owner. The condition of the exterior, interior and engine can vary depending on the vehicle's history. See the seller's listing for full details and description of any imperfections.Seller Notes:"Only 112,000 miles, minor rust,no major issues."

Only 112,000 miles ! Non-smoking owner and Loaded with options, such as: leather interior with heated  power seats(no rips,tears or stains) , auto headlamps, back-up sensors,power heated mirrors,rear window defog,power windows, power door locks, keyless entry, tilt wheel, cruise, wheel mounted radio controls,am/fm/cd,automatic climate control (works A-1) Powertrain in great condition,no major leaks and works as it should. Has some rust on rear dog legs (front of rear fenders) and minor surface rust on rear bumper (see pictures)nothing major. Also for some reason front radio speakers stopped working and power locks don't work.That is all to my knowledge that is wrong with it. This has been a very dependable vehicle for the 7 1/2 yrs. we have owned it. I have tried to be honest in my description but please keep in mind I cannot see into the future,this is a used vehicle,it is not perfect,and it is sold without any warranties or guarantees. If  you need a guarantee buy a new car. That said I will ONLY accept CASH as final payment NO CERTIFIED CHECKS ! Thanks and good luck.