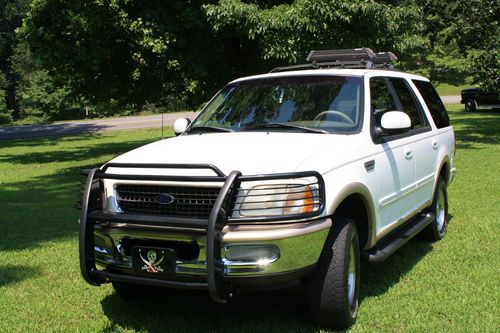 This is a Great Deal on a fully loaded 1997 Expedition Eddie Bauer Limited.The exterior is white and metallic bronze with beige leather interior. It has 4 wheel drive, heavy duty towing package and power everything!!!It has an additional electric brake hook up added for towing trailers equipped with brakes.The front seats have some wear in the leather. If we had kept, we would replace them. They are power seats.It has 3rd row, 3 passenger seat, drop down cup holders in the second 3 passenger seat, and two high back bucket seats in the front. Again, all leather.There's a new ski rack included and new front and rear bumpers! It has a new brush guard for those who like to off road frolic through the weeds.It is a one owner vehicle! It has a new 6-CD player in the console. It has a dual air conditioner system that currently does not work (may need coolant or repair).The odometer reads over 300,000 BUT it has a replacement engine installed in 2010, that had only 50,000 miles. We have put about 25,000 on that so it has around 75,000 actual miles on this newer engine.This will make a large family or a guy with lots of buddies, a really nice vehicle! Its clean!Call 865-805-0209