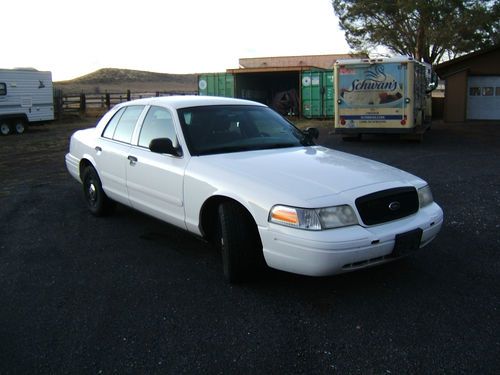 Condition: Used: A vehicle is considered used if it has been registered and issued a title. Used vehicles have had at least one previous owner. The condition of the exterior, interior and engine can vary depending on the vehicle's history. See the seller's listing for full details and description of any imperfections. ...
2003 FORD CROWN VICTORIA P-71 POLICE INTERCEPTOR

CORNER STROBES, WIG WAG HEADLIGHT FLASHER (DISCONNECTED) PER EBAY RULES
BRAND NEW PERELLI PURSUIT RATED TIRES
ALL EMERGENCY EQUIPMENT HAS BEEN DISCONNECTED AND INOPERATIVE.
INTERIOR AND EXTERIOR HAVE WEAR AND TEAR INCLUDING BUT NOT LIMITED TO SCRATCHES,
SCRAPES, MISSING PAINT AND STAINS THAT ARE CONSISTENT WITH VEHICLE'S AGE AND USE AS A POLICE CAR.
VEHICLE RUNS GREAT AND IN TOP RUNNING CONDITION
VEHICLE WILL BE SOLD IN AS IS WITHOUT WARRANTY COVERAGE

VEHICLE MUST BE REMOVED WITHIN 10 DAYS OF AUCTION CLOSE UNLESS SELLER AGREES OTHERWISE
SHIPPING LOCAL OR DELIVERY IN OREGON, WASHINGTON AND IDAHO CAN BE ARRANGED.
BUYER WILL PAY ALL SHIPPING AND DELIVERY COSTS.
THANK YOU FOR YOUR SUPPORT. GOD BLESS!