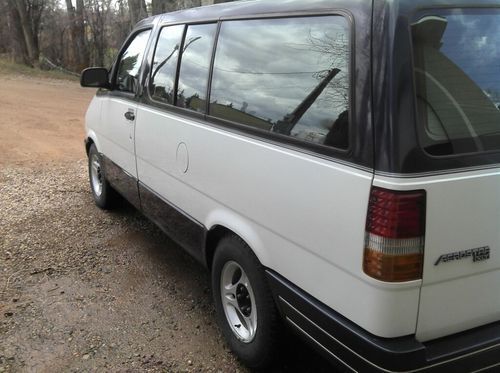 This van is in excellent condition and well maintained. It has a manual transmission. It seats 7 gets 24 MPG, Its great for camping and hauling lots of stuff. The back seats are removable and fold flat to make a bed or haul sheets of plywood. It only has 72k original miles on it (mostly wyoming highway miles), Most of these vans have over 200k and still running strong.... It has never been smoked in. Has all the options and ac is ice cold. The only things wrong with it is a cracked windshield and the wipers don't park sometimes. The rear bumper has age cracks in it, the paint is perfect and still very shiny, no rust anywhere. It has never been in an accident and never hit a deer. The 4 liter v6 has great torque for towing, It has a class 3 hitch. It is rear wheel drive but is excellent in the snow. (it has a ton of weight over the drive wheels) I towed my sled trailer many trips and never got it stuck. The Aerostars  only came with manual transmissions from the factory in the 3 liter/ base model. The automatic tranny died at only 40k and so I decided to convert it. The clutch, input shaft,  bearings and synchros were all new at that time, so it was a full rebuild. This is a true one-of-a-kind.

I am only selling it because I have too many vehicles and need to start restoring my turbo 5spd caravan. I will consider possible trade for a really nice gen 1 caravan or voyager.  I can drive up to 500 miles to help with delivery. $500 deposit required within 3 days. Will hold for 1 month for full payment. Call TXT or EMAIL 307-679-7785. Thanks