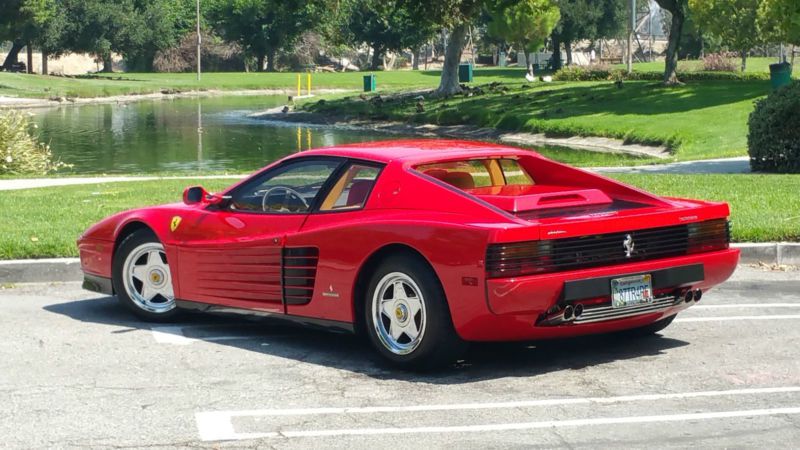 ** PICTURE IS WORTH A THOUSAND WORDS-
**SO CHECK MY PICTURES OUT - OF MY 87 TESTAROSSA - RED /BLACK AND TAN INTERIOR -BEAUTIFUL COND - LIKE OUT OF THE
SHOWROOM IN 1987 AT NEWPORT
IMPORTS IN CALIF - COME WITH ALL EQUIPMENT , LEATHER CASES FOR MANUALS/BOOKS AND ALL TOOLS THAT CAME WITH THE
CAR- NOTHING MISSING ! THIS CAR IS AN " INVESTMENT FOR UNDER 100K "- THERE ARE NONE AT THIS PRICE - SO PLEASE DON'T
KNOCK THE PRICE DOWN - IT'S NOT GOING TO HAPPEN -THIS CAR IS NOT A TRAILER QUEEN - I DRIVE THIS CAR - IT DOESN'T
SIT IN A GARAGE ALL YEAR - IT GOES TO ALL FERRARI CLUB MEETS AND SHOWS - THIS CAR IS WELL KNOWN IN THE SOUTHERN
CALIF FERRARI CLUB - THIS TIME I WILL LET THE PICTURES DO THE TALKING . **** A LITTLE HISTORY ON THE CAR - I HAVE
OWNED THIS CAR FOR OVER 10 YEARS-IT HAS BEEN OWNED BY ALL PRIVATE PARTY'S' - PEOPLE THAT HAVE BECOME FRIENDS OF
MINE - FIRST ONE A LAWYER IN NEWPORT BEACH -OWNED IT FROM 87 TO 97- SECOND OWNER LIVED IN HOLLYWOOD HILLS - OWNED
IT FROM 1997 TO 2005 AND THEN MY SELF FROM 2005 - PRESENT. THE SECOND OWNER HAD THE CLUTCH DONE AS WELL AS THE
TIMING BELTS , BEARINGS AND WATER PUMP - HE GAVE ME ALL THE OLD PARTS ,THAT WAS DONE IN 2005 BEFORE I BOUGHT THE
CAR .I DO ALL MY OWN WORK ON THIS CAR - ALL OF IT -FOR I AM A SR AIRCRAFT TECHNICIAN MECHANIC - OVER 30 YEARS - I
HAVE PERFORMED ALL REQUIRED SCHEDULED FERRARI MAINTENANCE BY THE SERVICE MANUAL AT THE CORRECT MILES THAT FERRARI
RECOMMENDS PER THE SERVICE BOOK - NOT SITTING IN THE GARAGE WITH LOW MILES - JUST SITTING THERE NO ONE DRIVING THE
CAR AND THEN HAVE A MAJOR SERVICE FOR 20K AND CALL THE CAR NEW - THAT IS NOT THE WAY FERRARI SCHEDULE MAINTENANCE
WORKS .THIS IS MY PRIDE AND JOY AND THAT IS THE WAY I HAVE TAKEN CARE OF THE CAR OVER TEN YEARS AS YOU CAN SEE BY
THE PICTURES. THE SAME GOES FOR THE PREVIOUS OWNERS - THIS IS WHY I BOUGHT THE CAR -FOR THE HISTORY AND WELL
KEEPING - PLEASE LOOK ON ANY OTHER AUTO SALES SITES - NOTHING UNDER 100K - NOT LIKE MIND - ALL IS NEW!!!!!!!!
-TIRES BRAKES ETC. - YOU NAME IT AND IT HAS BEEN DONE -THIS CAR IS BEAUTIFUL - UNREAL CONDITION AND SEXY !!!! YOU
NEED TO SEE IT -COME LOOK AT IT.... MAKE THE TRIP AND YOU WILL WANT BUY ASAP.... WHEN YOU DRIVE IT AND HEAR THE
SOUND IT MAKES YOU'LL FEEL LIKE A GOD. - THERE IS NO OTHER FERRARI LIKE MINE

There's a stable of about 40 beautiful prancing horses hiding in a Tennessee garage. These thoroughbreds aren't out to win the next Triple Crown, though. Instead, this is one of the best collections of Ferraris in the world where you would probably least expect it.
Photographer and auto journalist Clint Davis went there to write a story about collector Phil Bachman for the Ferrari-focused Forza magazine, and he took some dazzling photographs to go along with his words. At the same time, he brought along a friend to film their day meeting Bachman and his sublime collection.
Amassing this many sensational vehicles would be amazing anyway, but Bachman takes his Ferrari obsession even further. He prefers to get his cars in yellow and tries to get the last production example of a given model. In fact, he already has a reservation for the final LaFerrari. You can probably figure out in what color. Keep your eyes open here for glimpses of a plethora of vintage beauties, but the star of the show might be a yellow FXX.

CAR reports Maserati may benefit from the introduction of Enzo-succeeding Ferrari LaFerrari (shown below). According to unnamed parties, Maserati is keen to create a successor for the MC12 (above) based on the bones of the new Ferrari.
Details are about as scarce as they come, but CAR reckons Maserati has a few options when it comes to building its own supercar. Those include using the suspension, chassis and electrical systems of the Ferrari but with a unique carbon fiber body and without the LaFerrari's hybrid system. The new take on the MC12 could use a detuned version of the 6.3-liter V12 from the LaFerrari or stick a quad-turbo 3.8-liter V8 behind the front seats.
The latter option could see the next MC12 yield up to 900 horsepower, putting it within reach of its cousin as well as hardware like the McLaren P1. Of course, all of this - including our fanciful name in the headline - is just speculation for the time being. CAR says that if the machine makes its way to production, it would could cost well over $1.3 million.

The 2014 Formula One season opened with one overwhelming complaint - the cars didn't sound right. It sapped the excitement, despite the fact that this season has seen a number of truly thrilling races (Bahrain, Spain and Montreal all come to mind). Attempts have been made to restore some of the audible thrill of the cars, although efforts have remained unsuccessful.
If F1 can't fix the sound of the cars, then other methods need to be considered to restore its self-perceived lack of excitement. One of those involves fitting titanium skid plates to the cars in a bid to reintroduce the sparks that were so prevalent in the sport's past.
Mercedes-AMG and Ferrari conducted initial experiments with the new skid plates during early practice sessions for the 2014 Austrian Grand Prix. Kimi Raikkonen and Nico Rosberg had the plates fitted to different locations of their cars, in a bid to see which created the most dramatic sparks. Considering the photos the tests, though, neither Mercedes' nor Ferrari's setup really seemed successful, which is why you're seeing Johnny Herbert and his 1989 Benneton B188 up top.