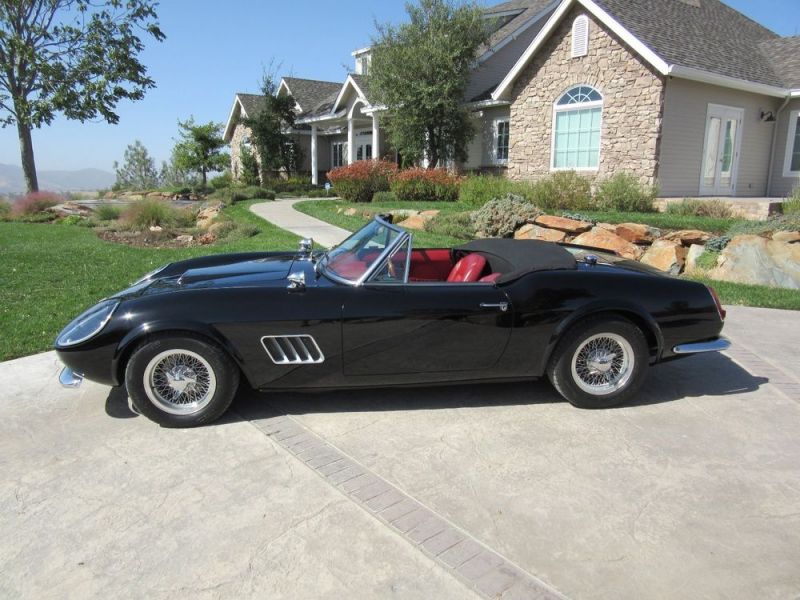 Just email me at: wynellwpposner@ukboss.com .

Oh Yeah!!!! Born elegant and made famous by the hit movie "Ferris Bueller's Day Off", this 1961 Modena Ferrari 250
GT California Spyder is absolutely stunning!
This beautiful Modena Design Ferrari is 1 of only 32 re-released 1961 Ferrari 250 GT California Spyders made and
are highly sought after by Ferrari collectors and auto enthusiasts around the world.
THIS IS NOT A KIT CAR! This stunning classic was hand built by Modena Design & Development in the El Cajon, CA
facility. In the early 1980s California entrepreneurs Neil Glassmoyer and Mark Goyett founded Modena Design and
Development in El Cajon to manufacture the Modena Spyder California, a Ferrari 250 GT Spyder-based sports car that
far exceeded the quality and finish of other independent offerings of the time to be used in the 1980's hit movie
"Ferris Bueller's Day Off".
The Modena Design Ferrari 250 GT California Spyder is so exact to the original, Ferrari sued Modena Design and won
a cease and desist order. Therefore, only 32 of these rare beauties were produced making them very rare and highly
collectible.
Unless you have 15 Million Dollars for the real thing, there are no others which compare to the Modena Ferrari 250
GT California Spyder. Modena Design won the hand crafted automobile award the year their spyders were produced!
Further, with the limited production due to the cease and desist order, the values of the Modena Ferrari 250 GT
California Spyders have been rising and will continue to rise. With only 32 made, the Modena Ferrari is highly
sought after, highly collectible and will continue to be a great investment!
This Ferrari Modena 250 GT Californa Spyder comes with the original sales brochure and build sheets (see photos)!
Do not get taken for a fake!!! This is a true Modena Design Ferrari 250 GT California Spyder!
As for the specifics of this vehicle:
Frame: Multi-tube backbone type, .120 Mild Steel, jig assembled, mig welded
Engine: Ford 5.0 Litre O.H.V. V-8
Transmission: Four Speed Manual
Front Suspension: A arm, lower control arm and strut, adjustable coil over shocks
Rear Suspension: Solid axle, four link with Panhard rod, adjustable coil over shocks
Steering: Rack and pinion
Brakes Front: 11" vented disc, semi-metallic pads
Brakes Rear: 10" drum, semi-metallic shoes
Wheelbase: 102.3"
Track (F/R): 57"/57"
Length: 173"
Width: 68"
Height: 50"
Curb Weight: 2,450 lbs
Weight Distribution: 50/50
Fuel Capacity: 24 Gallons
Mileage (actual): 9932
Final notes: The title is clean and clear in my name.

Video proof that LaFerrari has a pure electric mode

Typically, a hybrid car, with its gas engine and an electric motor/battery pack is able to run on both forms of propulsion independently of each other. That means you can sip gas, run on pure electricity or some variation there of. The Ferrari LaFerrari is not like other hybrids.
See, the successor to the Enzo has batteries, an electric motor and a great, thumping V12 engine, but unlike its rivals from McLaren and Porsche, it has no standalone electric mode. That's been Ferrari's party line since day one. But have the Italians been exaggerating a bit? Judging by this video, it seems like a real possibility.
The video comes from what we're guessing is a European track day. It shows a black LaFerrari stealthily sailing through a tunnel on pure electric power, which it shouldn't be able to do, before its 789-horsepower V12 fires to life.