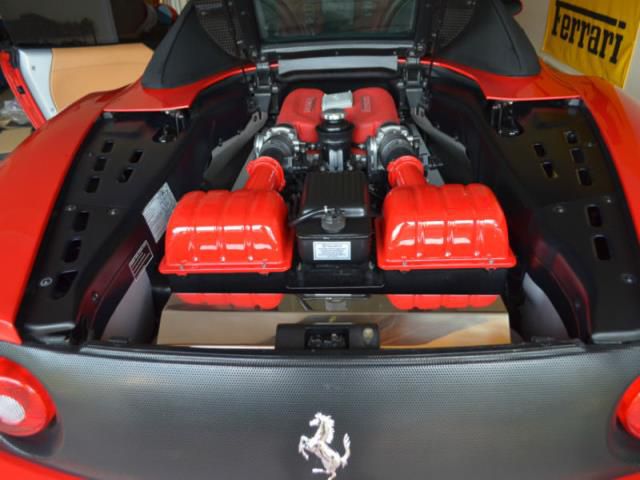 Caifornia Car All Recommended Maintenance /Repairs up to date. F-430 yellow tachometer and sub woofer box between seats with Fokol speakers. Performance Exhaust / CAD added 40. more HP ($8k). Clutch changed 2 months ago. Pristine condition. I have tried to get to original condition as possibile.Special 19 "rims and color coordination on under rear bumper and inside engine.Mechanicaly 10/exterior 10/inside 10.Very Aggressive Looking. Buying a new 458 italia.

This weekend the Formula One circus heads to Spielberg. No, not the Hollywood director, but the town in Austria that's home to the Österreichring. Subsequently known as the A1-Ring, these days it's called the Red Bull Ring, which makes this weekend's revived Austrian Grand Prix something of a home race for the defending champion Red Bull Racing team. But long before that it was the home race of the sixteen F1 drivers that call Austria their home - not the least of them Gerhard Berger.
The only Austrian driver to have won a grand prix (ten of them, all told) but not a championship, Berger was a fixture of F1 racing in the 1980s and 90s, spending much of his career driving for Ferrari. He later ran Scuderia Toro Rosso for three seasons, during which time Sebastian Vettel won his first (and still the team's only) grand prix. So with the Austrian Grand Prix back on the calendar for this weekend, the two highly accomplished drivers headed to the Red Bull Ring for a little juxtaposition.
Gerhard rolled in with the Ferrari F1/87-88C in which he won the 1988 Italian Grand Prix at Monza (which was, incidentally, the same race that Vettel won for STR twenty years later under Ferrari power), and Seb in his championship-winning RB8. Then they switched off, giving the four-time world champion his first chance to drive a grand prix racer with three pedals. If you can't believe that, it's also (as far as we can tell) the first time, despite years of neck-and-neck competition and retention of some of the best drivers on the grid, that a Red Bull or Toro Rosso driver has driven a Ferrari F1 car, and vice versa. See how it went down in the video below.

Records are made to be broken, and it seems that one may have just been snapped again. An Italian website is reporting that a Ferrari 250 GTO, owned by American collector Paul Pappalardo, recently sold for $52 million.
Now, this is far from confirmed - Pappalardo responded to questions about the sale saying, "I do not confirm these things, I have no comment about!" - and if it's a private sale, it's unlikely that we'll ever know the exact amount of the transaction. If that figure is correct, though, it easily eclipses the $35 million made in a 250 GTO sale in April of 2012, as well as the $27.5-million sale of a 1967 Ferrari 275 GTB/4 NART Spider sold at RM's Monterey auctions in August.
What makes a car that had 39 examples built more valuable than one that had only 10 units produced? Racing pedigree. The 250 GTO is a racing legend, with each car having a unique provenance that is more than enough to add some serious value. According to 0-100.it, the GTO in question, 5111GT, found its first owner in French racer and winner of the 1964 24 Hours of Le Mans, Jean Guichet, back in 1963. The Frenchman used the V12-powered racer to win the GT category of the Tour de France Automobile in that same year.