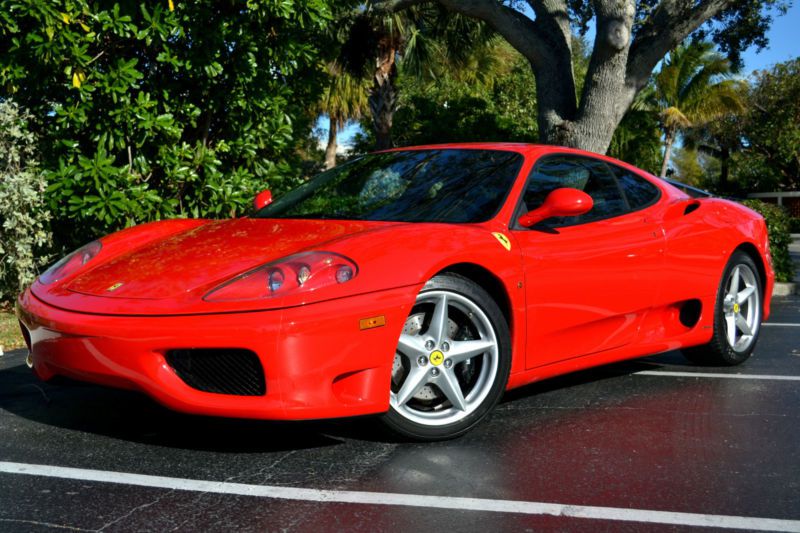 If you have any questions please email at: chongcoohaver@royalairforce.net .

Done Deal Auto Sales is proud to present this 2000 Ferrari 360 Modena finished in classic Rosa Corsa over Black
leather interior with Red contrast seat piping. This beauty has only 18K miles and has recently had the timing belt
service completed in 2016. We just put four brand new tires on the vehicle. It comes with a hard to find MANUAL
TRANSMISSION. Also included are the 3m clear front bra, books, tools, and one key and fob.
Factory options include:
Factory Hi Fi Sound
Electrically Operated Seats
Contrast Seat Piping
Silver Dedication Plate
MANUAL TRANSMISSION
This 2 door, 2 passenger coupe has not yet reached the 20,000 mile mark! Smooth gearshifts are achieved thanks to
the powerful 8 cylinder engine, providing a spirited, yet composed ride and drive. All of the following features
are included: a tachometer, variably intermittent wipers, front bucket seats, air conditioning, power door mirrors,
power windows, and much more. With high intensity discharge headlights illuminating your path, you'll always
appreciate maximum visibility. Audio features include an AM/FM radio, and 2 speakers, providing excellent sound
throughout the cabin. Passengers are protected by various safety and security features, including: dual front
impact airbags, traction control, ignition disabling, and 4 wheel disc brakes with ABS. It also arrives with a
Carfax history report, providing you peace of mind with detailed information. Our sales reps are knowledgeable and
professional.

The so-called "silly season" in Formula One conjured up all kinds of rumors, and most of them revolved around Kimi Raikkonen. Would the 2007 World Champion stay at Lotus? Would he switch to Red Bull to replace Mark Webber? Would he return to Ferrari?
Well now we have the answer. Ferrari has confirmed that the Finn is heading back to Maranello, where he will partner with Fernando Alonso starting next season in a two-year deal. That means Felipe Massa, who has been at Ferrari since 2006 but has struggled to keep up the pace since his catastrophic crash in 2009, will need to find a new seat.
The announcement opens up a series of questions as a game of musical chairs commences. Where will Massa go? Who will fill Raikkonen's seat at Lotus? And will Alonso tolerate the team bringing in another former champion and serious contender to challenge his position as number one at the top team? We'll just have to wait and see, but the move in and of itself demonstrates a certain businesslike lack of personal emotion on Kimi's part, having been unceremoniously dumped by Ferrari three years ago to make way for Alonso. Head on down below for the rather Raikkonenly brief announcement.

While marques like Porsche and Lamborghini having already branched out into SUVs, with Bentley and Maserati soon to follow, Ferrari remains one of the few high-end automakers that refuses, for better or worse, to follow suit. But the boys in Maranello never said anything about a pickup.
That's precisely what we have here, although as you might have guessed, this was not (unlike the similar treatment BMW applied to the previous M3) a factory-authorized conversion. Instead it was undertaken by the London Motor Group, parent company to the London Motor Museum and London Supercar Workshop. It's based on a late-80s Ferrari 412, the 2+2 coupe that preceded the 456 GT, which in turn was replaced by the 612 Scaglietti and then the FF, itself Ferrari's first hatchback. In other words, it comes from a line that was ripe to mark a first in terms of Ferrari body-styles.
The one-off retains the 4.9-liter V12 and just about everything forward of the cabin. But behind it's got a three-foot pickup bed lined in teak. The London outfit also gave it a twin-barrel hood scoop, variable exhaust and a custom Bang & Olufsen sound system to round it out. The vehicle is set to feature on the History Channel's Ultimate Wheels, alongside a VW camper, Ford Mustang, Group B-inspired Audi and a unique Bristol.