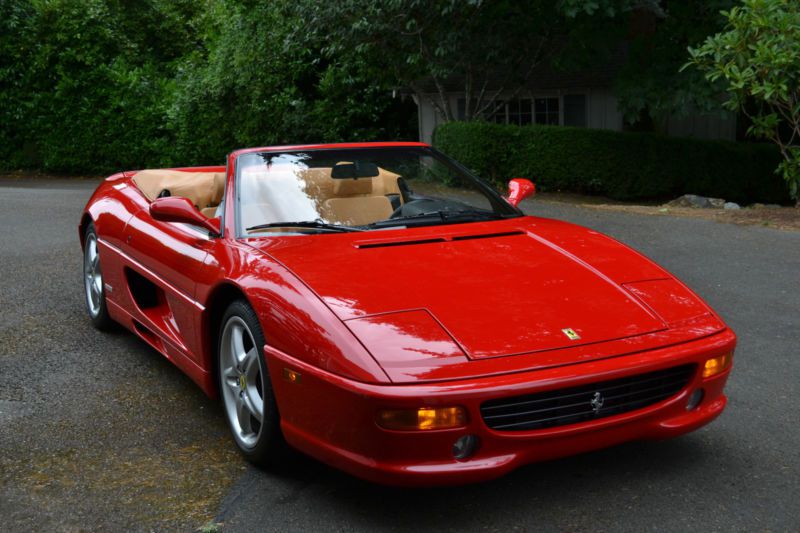 If you have any questions feel free to email me at: hollishansard@juno.com . Ferrari F355 Spider, 1996, original owner, 7001 miles.
I have either owned or driven many more contemporary 8 cylinder Ferraris, the F355 is still the purest
of the breed. It’s the last of the cars that was designed around the engine, the way Enzo intended rather than
around the driver (and no, it won’t carry a golf bag). The engine of the F355 is by far the best sounding of the
8 cylinder cars. With its lower displacement, high revving engine, it’s the one that has that primal shriek most
reminiscent of a Formula 1 car of its era.
This car is a manual 6-speed version. “Classic” Ferraris should not have paddle shifters, they have a slotted
aluminum shift gate that clanks when you change gears. That sound is half of the fun of driving a Ferrari. The
leather is as clean, supple and new smelling as it was the day it left the dealership. Every time I get into this
car I still get that “it’s my first drive” feel, most of that due to the familiar aroma in the cockpit. The
nose has a few small chips in the gel coat, otherwise the paint is flawless. All books, manuals, tools and
purchase papers are included in the sale.
This is a low mileage example, but the car has never been a trailer queen or garage fixture. It gets out 1-2 times
per month, at least around the neighborhood weather permitting, and for other events when they are appropriate.
Recent maintenance includes the 15k major belt service less than 500 miles ago. The Ron Tonkin Service department
in Portland Oregon (America’s oldest Ferrari dealer) mentioned that this was the nicest 355 they could remember
having serviced on. Except for the occasional warning light, this car has performed flawlessly and has been
essentially trouble free.

More than 600 Ferrari models, representing every era of the famed automaker's production, celebrated 30 years of presence in Hong Kong with a gathering at the Asia World Expo this past weekend. The event marked the largest single gathering of Maranello's sports cars ever organized in China. The weekend culminated with Marc Gene, Scuderia Ferrari's test driver, unveiling the new 458 Speciale.
There are only about 1,700 Ferrari owners in China, and they boast an average age of just 35 years. The young clientele in the Asian market often take advantage of Ferrari's 'Tailor Made' bespoke program and they have a growing interest in racing. The automaker says that many will travel to the Mugello circuit in Italy to participate in the final event of the Asia Pacific series of the Ferrari Challenge in a couple weeks.
"I am pleased to be here to celebrate Ferrari's thirty years in Hong Kong, along with so many owners who share our passion and the search for excellence, exclusivity and innovation," said President Luca di Montezemolo. The video shows hundreds of Ferraris, in popular white, yellow and red, being arranged indoors to form the Bauhinia Blakeana, a five-pedal flower that is the characteristic symbol of Hong Kong. Apparently owners of the more exclusive Blu Scozia, Avio Met and Vinaccia colors were asked to park outside. Scroll down below for a video and press release detailing the event.

This is the Ferrari 458 Speciale, and while its name might underwhelm, its performance and lineage more than make up for it. The successor to the proud line of hot, higher-performance, mid-engined Ferraris like the 360 Challenge Stradale and 430 Scuderia, the 458 Speciale is blessed with a 596-horsepower, 4.5-liter V8 and the ability to skip to 62 miles per hour in three seconds. It also comes with a not-so-subtle racing stripe, which we like.
Thanks to a scarcely believable curb weight of 2,844 pounds, special Michelin Pilot Sport cup 2 tires, and a few tweaks to the electronic diff, the Speciale is quite a dancer as well. Naturally, Ferrari is showing off the newest member of the scuderia at Frankfurt, and we made it a priority to see it in person. We've got a full gallery of live images above, a video and stock photography from Ferrari down below, and our original coverage of the car, from August, right here.

Whether it's Mozart, Beethoven or The Beatles, they all (arguably) pale in comparison to just the right engine note for many auto enthusiasts. Petrolicious has found one of the absolute best with its latest focus on a 1972 Ferrari 312PB.
The 312PB is important for more than just its ability to sound like an automotive symphony. It was also the final purpose-built prototype racer of the era from Ferrari before the Prancing Horse put its entire focus into Formula One. Maranello went out with a bang, though. The 312PB's design is simplicity itself with just a modified wedge shape combined with the necessary scoops and ducting to keep its 12-cylinder engine at full tune. The car won a string of races and scored the 1972 championship. Although even if it had been a loser, the racecar likely would have been famous just for its wonderful exhaust note.
In the video, Petrolicious expertly balances its interview with owner Steven Read with wonderful cinematography and just letting the Ferrari sing around the Willow Springs track. Crank up the volume and scroll down to get a wonderful earful of this sonorous vintage racer.