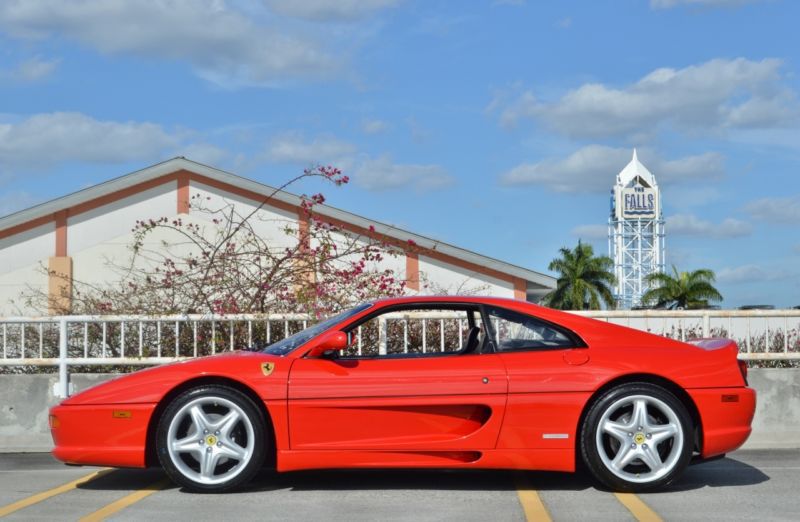 1995 Ferrari 355 GTB 6 Speed
We are proud to offer this beautifully spec'd 1995 f355 Berlinetta with a Gated 6 speed and desirable options!
2 owner car since new, previous owner took very good care of her form 2000 - 2017! Very rarely do you come across a
355 that checks all the boxs... 6 speed, rosso corsa, berlinetta, Carbon Fiber Challenge seats, challenge grill and
serious service history. Although this car has been driven it has been exceptionally maintained by " Scuderia
rampante " with receipts totaling $73k including all new head work and top end rebuild.
This Colorado car has only been driven in nice weather and shows, ORIGINAL paint looks amazing with little to no
road wear on the front clip. The interior is immaculate, the challenge seats show little to no wear at all and the
interior pieces are not sticky, carpets and the leather through out is in amazing condition... there is some slight
leather shrinkage on the dash but not easily noticeable.
Mechanically this 355 shines, by far the best driving 355 that ive driven in quite sometime... feels as if it had
5k miles. Engine starts first crank with no hesitations or smoke, no battery drainage either. The gated manual is
butter, clutch is perfect. Suspension is all factory and performs flawlessly. The full Tubi exhaust is a must have
with a 355... if your going to have the best sounding Ferrari ever produced you have to go Tubi, they just go hand
in hand.
Included is the full tool kit including belt and plugs, books, manuals, warranty booklet, full service history, and
a clean carfax.

Three Free Practice sessions left us thinking Lewis Hamilton looked good to claim another victory for Mercedes AMG Petronas and close up the Driver's World Championship race, but the first qualifying session for the 2014 Hungarian Formula One Grand Prix threw out that script. A fuel leak in Q3 set Hamilton's car aflame and he never set a time. His chassis damaged beyond repair, the team built him a new one and he started from pit lane. That same session also claimed Ferrari's Kimi Räikkönen, when a bad call about whether to go out again dropped him down to 17th and out for the day.
Without a real challenge, that put Hamilton's teammate-slash-nemesis Nico Rosberg on pole in the other Mercedes, followed by a resurgent Sebastian Vettel in the first Infiniti Red Bull Racing, Valtteri Bottas in the first Williams and Daniel Ricciardo in the second Red Bull. Fernando Alonso waved the scarlet in fifth for Ferrari but figured he could be in third place by the end of the first lap. Felipe Massa put the second Williams in sixth, followed by Jenson Button in the first McLaren, Jean-Eric Vergne getting up to eighth for Toro Rosso, Nico Hülkenberg in ninth for Force India and Kevin Magnussen in the second McLaren.
When rain poured on the 4.381-kilometer Hungaroring before the race, every script up and down the field got rewritten, and they would continue come in for revision almost every one of the 70 laps.

At its recent Geneva Motor Show unveiling, we couldn't help but spend a good long time gawking at the new LaFerrari supercar. It isn't just that it's the newest top-line Ferrari, or even that it picks up where the Enzo left off - it's just that there's so much to look at, from the ductwork in its long nose to the delicate artistry of its sideview mirrors. There's so much aerodynamic wizardry in play on every surface that you just want to pick it up in your hand and look underneath to take a closer look every which way - even underneath.
Sadly that's not possible, but we may just have the next best thing. Autoblog reader Giorgio has come up with this clever interactive 3D model of the LaFerrari, and we think it's neat enough that you might want to take a look - check it out by scrolling below. And don't forget - we love featuring what our car-crazed readers are up to, whether here or on our Facebook page, so keep those tips coming.