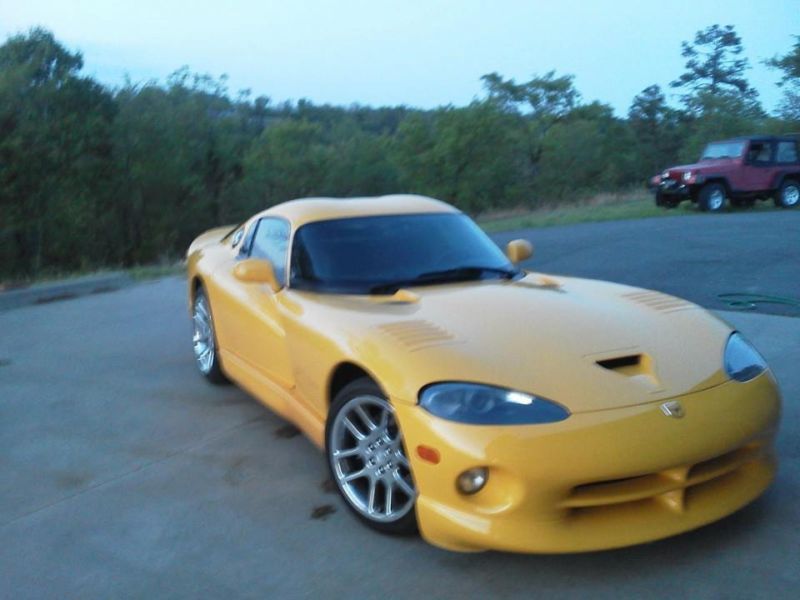 This is a beautiful 2001 Race Yellow Viper GTS.  Most of those miles were on cruises with
car clubs.  The car runs great, looks absolutely stunning and has given me no
problems.  I am just not driving it anymore and am ready to move to something
else (69 Road Runner I need to fund).  Fresh tune-up 2 months ago with new
Demon coil packs, plugs, and full fiberglass sleeved custom wire set.  Tires
are in good shape with Nitto Invo's (less than 3000 miles).  Always garaged and
never driven in the rain.  The only real cosmetic issues I can think of is a
dent in the exhaust cover on the passenger side it's down low and I never really
notice it ( it was there when I bought it).  There are also some abrasions to
the chin spoiler.  These cars are very low and this is a common problem.  I
have a chin spoiler protector on the car but the corners still occasionally
scrape entering driveways etc.  I don't really notice it myself but you may
want to get it fixed.  If you don't like attention then you do not want this
car.  The first time I drove it to the local Sonic, a man literally ran along
side me screaming, "Oh my God that's a Viper, a real Viper".  Ever since that
day I realized what a rare and beautiful car the Gen II Viper is.  I will miss
her, but hate to see her sitting under the cover in the garage all of the
time.   Other recent additions to the car were Roe racing smooth tubes, and
new factory valve covers. (the old ones were bubbling and I love to open the
hood for people, as they always ask me to do).