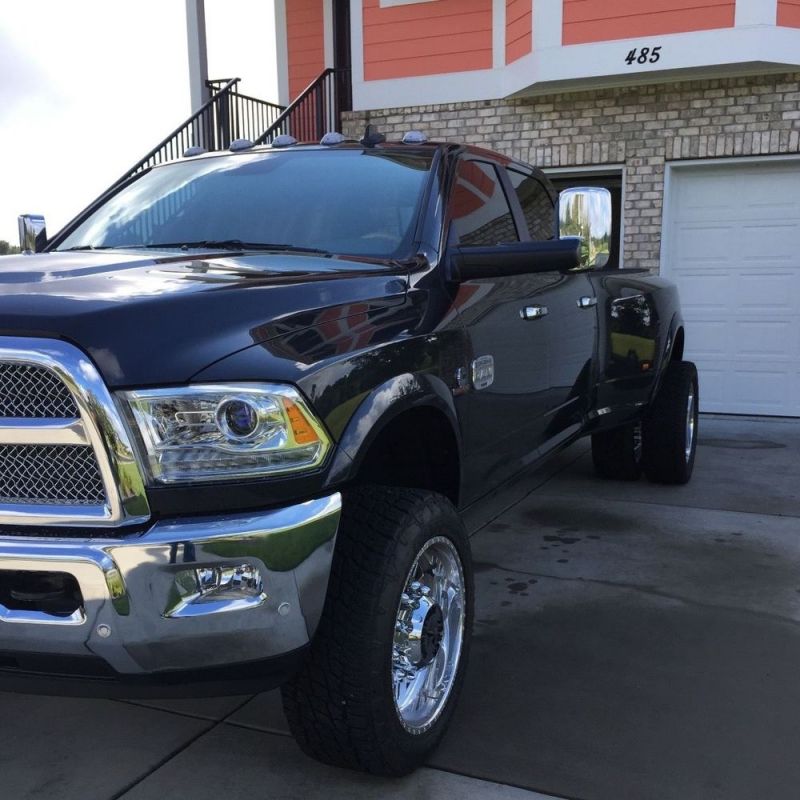 This truck turns heads everywhere it goes! No dents or dings anywhere. Navigation, Radio, Blue Tooth, Climate Controls are all touch
screen. Equipped with everything you can get. Heated and cooled seats. Memory settings for seats. Heated steering
wheel, power sun roof, power sliding rear window, a/c plug as well as 12V. Has the UConnect system with the
concierge, Sirius satellite radio and many apps that work with phones. Too many options to list! Nicest finished
wood and leather interior that you will find in a truck!
The truck has been fitted with the following as well. 4 inch lift and leveling kit. 22 inch American Force (custom
made for this dually) aluminum wheels with still like new Terra Grappler tires. Amp Research auto retract side
steps. This truck sits nice and high, these Amp Research steps extend when any door opens and then auto retract out
of sight when door closes. This gives the truck a nice clean look. The Dodge factory fifth wheel hitch is rated to
tow 25 thousand pounds. Fifth wheel hitch is also easily removable. The truck is equipped from the factory with
built in mounts in the bed for the hitch. Pull four pins, hand rotate the mounts and lift the hitch right out. Has
plugs for the holes in the bed when the hitch is out. Truck bed has factory spray in bed liner. LED light bar in
front bumper with independent switch on dash. No curb rash or scratches of any sort on the wheels. Shines like a
diamond when polished up!
4 Wheel Drive. I think that when in four wheel drive low, this truck would pull a house. The dual rear wheels also
almost guarantee that you could never get it stuck!
The Cummins Diesel engine is super strong!